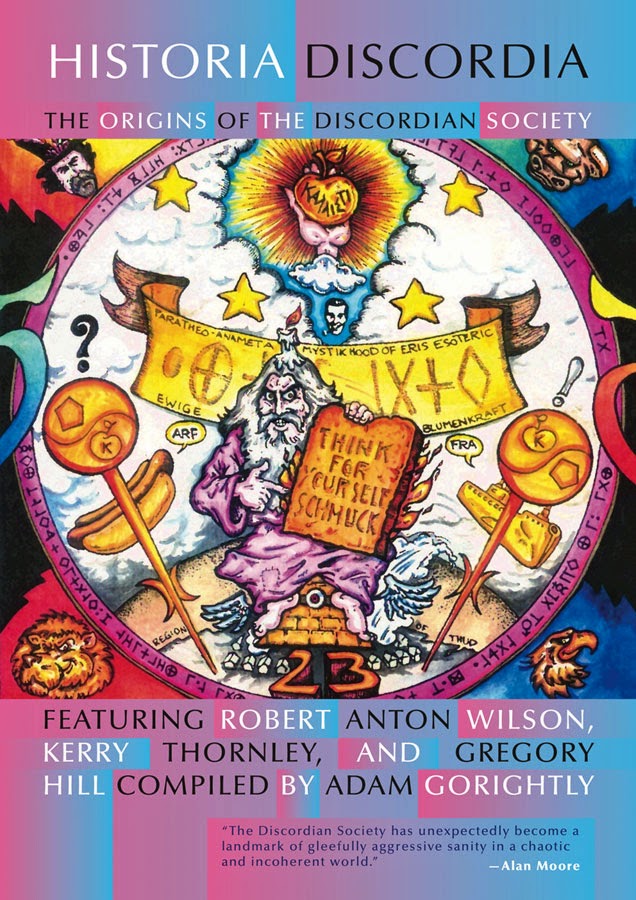 Adam Gorightly's Historia Discordia is a very useful book for anyone who wants to understand Illuminatus! and/or Robert Anton Wilson's literary career.

As Adam has shown with his blog commentaries to the Illuminatus! online reading group, Illuminatus! is filled with Discordian symbols, teachings and terminology.

The book is based on a large trove of documents, the Discordian Archives, that Robert Newport gave to Adam. Adam has organized these documents into sections, with commentaries that offer perspective and explanations.

Included are a very rare first edition of Principia Discordia and  a copy of the previously lost Honest Book of Truth, written by Kerry Thornley, which is quoted on the first page of Illuminatus!

About the latter, Adam writes: "For years, many suspected that The Honest Book of Truth never actually existed, other than a few quotes that Kerry Thornley cooked up… but now, at last, the truth can be told! Lord Omar (Kerry) did indeed compose a work called The Honest Book of Truth, a 15 page irreligious tract that will be reproduced in its entirety in my forthcoming book, Historia Discordia: The Origins of the Discordian Society.

"As a sidebar, when I was talking to RAW once regarding his thoughts on Thornley as a writer, he told me that Kerry’s most significant work was The Honest Book of Truth—a comment I didn’t know what to make of at the time, because I, like most everyone else, believed that the book never actually existed."

Obviously, this blog post was written shortly before the book was issued; citation here.

While RAW and Robert Shea took a lot from Discordianism, Adam's book makes it clear that they also gave a lot back. I thought the first part of the book, in which Kerry and Hill create Discordianism and make themselves the leaders of the movement, was a little flat. It only really takes off when RAW, the best and funniest writers among the Discordians, started contributing prank letters and other documents. I would also argue Illuminatus! did a great deal to promote Discordianism, perhaps even making it seem a little more interesting than it actually is.

Discordianism also became more interesting when Greg Hill opened it up to allow everyone to become a Pope, a development that Adam documents in his book (page 117).  As Adam writes,  this change transformed Principia Discordia "into more of an art project than a religious tract" (page 116).

(Disclosure: Although I would have eventually bought a copy of the book, Mr. Gorightly's publisher, perhaps sensing that the weirdoes who read this blog might be interested, sent me a review copy.)

UPDATE: Adam has another Eris of the month.