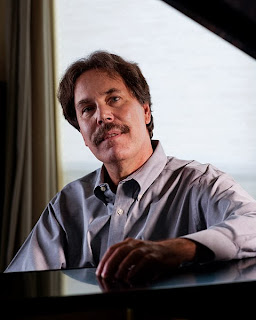 Ted Gioia. He grew up in a Mexican-Italian family in Hawthorne, California, so he probably got to eat spicy food from an early age and hung out with the Beach Boys and George Harrison's second wife when he was a small child. No wonder he's cool.

Back in 2011, I came up with a bright idea for advancing Robert Anton Wilson's place in the literary canon -- send copies of Illuminatus! to influential critics and authors.

I still haven't sent copies of the work to Michael Dirda or Harold Bloom or Neil Gaiman. But I knew Ted Gioia a little bit (only in the sense of having exchanged a couple of short emails with him) and after asking his permission I bought a copy of Illuminatus! from Amazon in 2011 and had it shipped to him. He promised to get around to reading it sometime, and I promised not to pester him about it. (I didn't name him in the 2011 post I've linked to, above, because I didn't want anyone else to pester him, either.)

Gioia is an interesting guy, a kind of Deion Sanders* of arts criticism. He is almost certainly best known as a jazz expert. His The History of Jazz, Second Edition, is arguably the definitive history; I read it a couple of years ago. He's also written well-received books on blues and on jazz standards, founded jazz.com, has recorded jazz music, has been a producer on jazz recordings and on and on and on. You get the idea. I forgot to tell him that Robert Anton Wilson loved jazz.

This would be enough for most people, but his ambitions as a literary critic are equally impressive. He wrote a wonderful "The Nobel Prize in Literature from an Alternative Universe" and the piece fixes a lot of mistakes (my take on his list is here.) He's been writing a lot about James Joyce lately, but in fact he seems determined to write about just about every interesting writer who ever lived. See his Great Books guide, and follow the links to other Web sites that list the 100 best novels of all time, great science fiction books, postmodern mysteries, modern conceptual fiction ... it would be great, I thought, if he actually read Illuminatus! and enjoyed it, but a bit of a bummer if he hated it and denounced it on the Internet.

So imagine my pleasure when he actually did read it a few weeks ago. He's just posted a review at his Conceptual Fiction review site (although I would argue the review also would have fit nicely at his Fractious Fiction site, where you can find his stuff on Joyce, William Burroughs, etc.) Oh, and he liked it.

Notice how Ted zeroes in on two of the most important points about Illuminatus! -- the way that Wilson and Shea blurred the lines between reality and fantasy, and the way that Illuminatus! seems to forecast many of the government abuses such as NSA spying that are in the headlines today. Ted also spots how Illuminatus! was a postmodern novel, mixing "high" and "low" culture, long before such hybrids became fashionable.

Please read the whole review, but here's a taste:

When you reach the final pages of this work, you will find that your greatest challenge
as a reader is not evaluating the literary merits of the trilogy, but determining
how much of it the authors themselves actually believe—and, by extension,
how much credence you ought to give to their claims.

At a minimum, grant these audacious authors credit for uncanny predictions
about their future (and our present).  When forced to specify the goals of the
dominant conspirators, they offer this wish list:

This list was published in 1975, but could show up in a current-day editorial,
and none of the items would seem out-of-place.  Of course, many items on
this wish list are no longer wishes, having come true during the intervening
years.

His brother is Dana Gioia.

* This is arguably a poor analogy because only Americans will understand a reference to an American sports star, but I kept it in because I like it. Hey, it's my blog! Explanation: Deion Sanders was a star American football player in the NFL, and also was a starter for the New York Yankees baseball team. This kind of mastery of two popular American professional sports is pretty much unheard of. From the Wikipedia bio: "During the 1989 season, he hit a major league home run and scored a touchdown in the NFL in the same week, the only player ever to do so. Sanders is also the only man to play in both a Super Bowl and a World Series."

That was an entirely fabulous and insightful review! Hopefully it will fuel some more reads of Illuminatus! (and other RAW books)

Tom, I commend you on your work to get RAW more literary recognition. I can't think of any other author/philosopher who is more relevant and prescient.

Also, I really enjoyed that review as well. As a matter of fact, I had never heard of Ted Gioia but he seems to have great taste and I ended reading a bunch of his other reviews posted on his site.