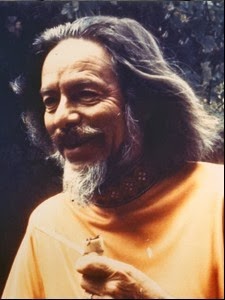 Suddenly, Alan Watts is coming at me from all directions. The "Shrapnel" chapter in Coincidance (the second one) quotes Watts (about how the Roman Empire never fell.) The work-in-progress Daisy Eris Campbell play about RAW dramatizes the influence Watts had on Wilson.

There's a new film about Watts. The creators of "South Park" have animated some of his lectures.

Michael Johnson, the Overweening Generalist guy, wrote to me this week to talk about the impact Watts had on RAW.

"In RAW's online Tale of the Tribe course, he credits Watts with turning him on to zen, Leary and Crowley. I think maybe this makes Watts the most influential living mentor in RAW's life, or at least in the Top 3," Michael wrote.

"RAW was introduced to Watts by Arlen. RAW introduced Watts to one of his later wives, Jano. And the two visited in Yellow Springs. Jano had a notion about synchronicities or what Lilly called Cosmic Coincidence Control Center, but Jano called it The Net. This was around 1962. Watts's riffs on the Roman Empire never falling had an impact on RAW. Watts told RAW he'd read a new book on Crowley by Israel Regardie and he thought it was amazing. RAW said any time Watts recommended a book it was something like a Sure Thing," Michael wrote.

(From RAW's intro to Eye In The Triangle: "It was recommended to me by Alan Watts, who said, 'It's the best book on mysticism that I've read in ten years or more.' I had been reading Alan's books for a decade and had known Alan for almost as long, and my Hemingway bullshit-detector had not yet found a sentence anywhere in his books containing BOVINE EXCRETA. If he recommended a book, I immediately trotted off to buy a copy. He knew what good writing was, even in the area of mysticism, where the author is, by definition, trying to unscrew the inscrutable and eff the ineffable.' (p.x)")

Michael explained that in those pre-Internet days, when "find the others" meant face to face relationships, Watts was a catalyst for intellectuals such as Robert Anton Wilson because Watts knew so many interesting people. Michael gave me some examples:

"Watts owned a houseboat in Sausalito, just north of San Francisco, and it was there that the gurus of the New Left, Gary Snyder, Leary, Ginsberg, Kesey, et.al...met to figure out if they should be activists or to drop out ala Leary. In Markoff's What The Dormouse Said, he writes that est 'was most closely derived from the version of zen taught by Alan Watts from a Sausalito houseboat during the 1960s.' (p.209) Ginsberg confronted Leary over his sloganeering for LSD there, on the houseboat. If you read Conners's The White Hand Society, it's basically Leary and Ginsberg spending most of their free time on the East Coast going around turning poets, painters, musicians and big-money-types onto LSD. So, within five years, there was some sort of schism between Tim and Allen.

"Watts was part of psychedelic inspired intellectual sessions in the mid-1950s with Oscar Janiger, the LSD psychotherapist who turned Cary Grant's life around, and who was a cousin to Ginsberg. In Sex Drugs and Magick RAW considers Watts, Aldous and WSB as the psychedelic sophisticates. All three had problems with Leary's media advocacy for LSD. All three were captured in artwork at Millbrook.

"When Watts traveled south to LA, he was in the matrix with Aldous, Isherwood, Gerald Heard, and Swami Prahavananda: big influence on Hollywood types. (see Don Lattin's Distilled Spirits, pp.131-135)."

Here is a Zen Pencils adaptation of Watts. You can also visit the official Alan Watts website, maintained by his son.

Shrapnel from Michael: "RAW thought Watts's biggest influence on others was 'mystical christianity.' Watts championed Bucky Fuller and McLuhan in 1967. I think Watts has been given short schrift by Aldous Huxley-ites: their infl has been complementary. The LaRouchites have long been paranoid about Watts and Huxley as Brit agents sent to the US to weaken its children through mysticism and drugs. Throw in Beatles there too...

"Tom Robbins said Watts was an influence on his first book, Another Roadside Attraction, and later quotes Watts within the context of the post-9/11 world: "When you become truly convinced the human condition is hopeless, you enter the Zen state." (Conversations With Tom Robbins, p.38 and p.125)

"By 1959 Watts was not smoking pot. Around then he started calling himself a 'philosophical entertainer,' 'in show biz,' "a genuine fake,' and 'an irreducible rascal.' When he took off with Jano he left former wife Dorothy and four kids. He was always hustling for money to pay his debts. He drank a LOT. Why did he quit psychedelics? He said (I paraphrase from memory): 'Because when one has picked up the telephone and gotten the message, one hangs up.' "

Alan Watts had a great influence on me. I read lots of his books and got ideas like:
The environment is our body.
Light shines in darkness because what else could it shine in?
Police enforcing victimless-crime laws are armed clergymen
and lots more.

I read my first Alan Watts book
(The Way of Zen) in around 1960, but far more influential were his weekly talks on radio station KPFK in Los Angeles where I lived at the time (they were rebroadcasts of the original talks on KPFA in Berkeley.) Watts' thinking was much more lucid in the talks and covered a far wider range of experience than the books. Mark Watts has gathered transcripts of many of these talks into a number of books (my favorite, What is Taoism?) and I would give my highest recommendation to these.

Terrific piece, although Moses Horwitz had perhaps an even greater influence of Bob. (Horwitz didn't die until 1975.)

I too started reading Watts with The Way of Zen. I read it in 1982 on a trip to New Mexico with my dad. I also had The Eye in the Triangle with Regardie with me. I love Watts's short essay on his relationship with D. T. Suzuki.

Alan Watts in love with Jean Burden, the poet, for the last fifteen or twenty years of his life. She was the ,"important influence, " he speaks of below:

There is a " cryptographic ," puzzle to solve in his autobiography , "In My Own Way"(footnote, Page297) by Alan Watts.
Alan wrote that when solved it would reveal another influence his life. It is up to you to judge how strong this influence might be.
Writing close to his death , he listed :" Alice Meynell, Walter de la Mare, Emily Dickinson , Kenneth Rexroth, Karl Shapiro, Jean Burden, Eric Barker." He then stated that a "cryptographic study would produce a clue to this important influence." One need study a dedicatory poem ,Alan instructed, found in his book "Nature, Man , and Woman " (published 1958) from which the answer could be obtained. It follows:

To the beloved company of the stars, the moon, and the sun;
to ocean, air, and the silence of space;
to jungle, glacier, and desert,
soft earth, clear water, and fire on my hearth.
To a certain waterfall in a high forest;
to night rain upon the roof and the wide leaves,
grass in the wind, tumult of sparrows in a bush,
and eyes which give light to the day.

The answer takes the first letter from the second word in lines three, four , five and six.


Jean Burden, the poet , poetry editor of Yankee magazine,(AKA Felicia Ames) ,is the solution to the cryptograph in the "dedicatory" poem Alan Watts wrote for "Nature, Man and Woman."
They were lovers for five years. Jean would not have him as he could not be faithful. Alan then married Jano.