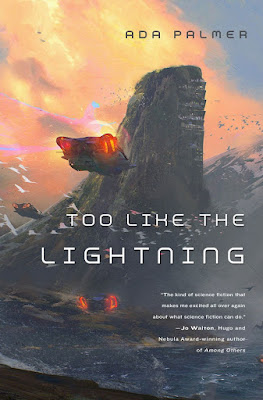 Too Like the Lightning by Ada Palmer  is the most interesting science fiction novel I have read so far this year. I was pleased it was named a finalist for the 2017 Hugo Awards. (I've heard good things about the other nominees but haven't read them yet.) I'm reading the sequel, Seven Surrenders.

Greg Arnott, a RAW fan who contributes comments to this blog, is also a serious reader and a student at West Virginia University, and he is leading an OTO book club discussion about the book via Skype, beginning May 1, and readers of this blog are invited. Here are the relevant details from Mr. Arnott:

Come join me in the year 2454 where nation-states, the nuclear family, gender, and war have been abolished. In a world that some readers have condemned whilst making others wistful for Utopia. Explore the ideas of Voltaire, Diderot, Jean-Jacques Rousseau during a point in humanity's crawl up from the slime where the earth can be circumnavigated in five hours and where public religious sentiment has been outlawed. Come and join me in a world that is tantalizing and terrifying; one that is ultimately a projection of our own society’s qualms and aspirations.

The first book is Too Like The Lightning by Ada Palmer.

We will be covering approximately 8-9 chapters per session. Please have the chapters read prior to the Skype call.

Technical:
To join in we ask that you make us your contact on Skype by searching our ID which is pittsburgh.thelema. Once you do this we will confirm you as a contact. At 8PM EST the discussion begins. At this time call in (with just audio, no video) and we will add you into the group call.

This is Tom again. The 11th chapter of Seven Surrenders is set in Ingolstadt and includes the sentence, "The Earth will shake," an amusing synchronicity for RAW fans. The series can be read as a battle between competing conspiracies, and the ban on religion that Greg mentions can be read as a ban on belief systems. Just thought I'd toss that in.

I didn't catch that! Although I have planned on telling readers that if they want to read another fictional treatment of the philosophies of Voltaire and Rousseau with a strong occult slant they should check out the Historical Illuminatus. The scene where Sigismundo travels through the town where a man is being executed for possessing Voltaire's atheistic works was particularly vivid my first time through.

That reference kinda shakes my idea that the Ingolstadt setting is primarily concerned with Frankenstein. There are quite a few references to Shelley's work (the first true sci-fi novel according to Alan Moore) in Palmer's series so I still think that rings true, but I did point out in an essay written long ago that Victor's placement had to be influenced by Weishaupt's legacy.

I also feel the Utopian hive has a lot of similarities to RAW's concept of the L5 space colonists; they're untiring fight against death and disease, they're space travel ambitions, they're love of science and whimsy. Pretty striking. You'll have to find out how much Palmer consciously emulates RAW. I mean, other than Apollo Mojave's motives they seem to be a direct descendants of the tripped out inhabitants of the space cities in "The Trick Top Hat." Oh, and they no one smokes pot in the future which I declare to be bunkum. Absolute bunkum I say!

Considering the ultimate Brillist motive in the books concerns theories about cyber-realities suggested by Ramsey Dukes and Erik Davis I think we can find a lot of intrinsic interests between mysticism and sci-fi if Palmer didn't deliberately crib from those sources.

I guess the idea of seeing the ban on religion as a ban on belief systems is why I don't have as much of a problem with it as some other readers have experienced. I've often joked I'm a militant agnostic. Probably not much of a joke. I've made a dogma around anti-dogma. The sensayer system is nigh perfect in my mind.

There's also the reference to the Utopian's name for J.E.D.D. Mason being a dual reference to both Voltaire and Heinlein which leads us to Parsons...the OTO...Crowley...

I would also see an analogy with Robert Anton Wilson's works in the sense that "Too Like the LIghting" was published as science fiction, but is really aimed at (and deserves) a wider audience.