Robert Anton Wilson (and Bill Nighy) in the Guardian 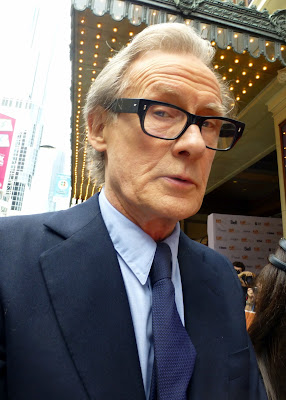 British actor Bill Nighy has enjoyed a long career and became well known finally for his role as a veteran rock star in the romantic comedy Love Actually. But he actually began professionally in the Ken Campbell production of Illuminatus! and that's mentioned in a long article about Nighy in the Guardian.  The sentences relevant to this blog:

His first London stage roles were as part of Ken Campbell’s Science Fiction Theatre of Liverpool, a company given to staging 24hr-long plays without any rehearsal; his debut National Theatre appearance, in an adaptation of The Illuminatus Trilogy, was further enlivened when the books’ co-author Robert Anton Wilson arrived backstage and started doling out LSD to the actors about to perform, an experience he tactfully describes as “extraordinary”.

I tried running some searches and can't make out whether Nighy played any of the main characters in the book, but Nighy, who seems like a great guy and an interesting person (those qualities don't always inhabit the same body, obviously) seems to inspire long writeups, such as this one in the Telegraph, which has more about the Illuminatus! experience.

What helped Nighy most, as “a chronically self-conscious” young actor, was working with Ken Campbell, who was too avant-garde to believe in rehearsing. “Ken’s catchphrase was: ‘Rehearsal? You’re all grown men!’,” Nighy recalls. With Campbell, Nighy performed in Illuminatus!, which Peter Hall saw in Liverpool in 1976 and booked to open the new Cottesloe Theatre. “It was eight hours long,” Nighy laughs. “The intervals were sometimes longer than the play. The audience and the actors would go to the wine bar together. By the end of the show, everybody was seriously chemically undermined. It was hilarious, one of the longest jokes ever told.” The play, described by Brian Aldiss as something Bertrand Russell and Genghis Khan might have dreamed up while rewriting Monty Python, had 450 speaking parts. “Ken would say: ‘You’re playing a man in Yorkshire who’s seen a UFO, you’re playing a man in 16th-century Bavaria who’s had his tongue cut out, you’re playing a Chinese ambassador, you’re playing a man who smoked opium with Ouspensky and a Gestalt therapist called Ralph in California.’”

The Guardian article is via the Cosmic Trigger play Twitter account,  and please note that Claudia Boulton says, "Well we are rehearsing every scene in Cosmic Trigger at least once!" (More on Claudia).
on April 14, 2017

Wow. This is the first I heard about RAW handing out Acid to the performers, LOL.
If I'm remembering correctly, Nighy played George Dorn

I've read that about RAW before, but cant remember the source. It was probably Ken Campbell himself. RIP. Amazing guy.