Kinks guitarist is a RAW fan 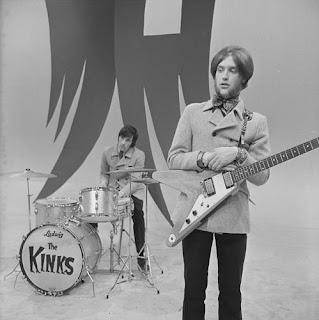 If you are a certain age — OK, if you're old like me — you'll know that the British Invasion wasn't just The Beatles and the Rolling Stones, but also included many other fine groups, such as the Kinks, known for hits such as "You Really Got Me" and "Lola." The main songwriter, Ray Davies, is the best-known member, but his brother, Dave Davies, is the group's lead guitar player and an important part of the band's sound.

Via Jesse Walker (a Kinks fan), I learned that the Daily Express, a British newspaper, has a recurring feature in which a celebrity is asked to name six favorite books. Dave Davies was interviewed on April 19, and the six he mentioned include Right Where You Are Sitting Now by Robert Anton Wilson: "Wilson had a very interesting take on the way the world functions. His ideas were a breath of fresh air. Everybody’s vision of reality is different. He talks of understanding the differences and how we should be compassionate about what others think."

But wait! There's more! (as the old TV commercials used to say). If you follow the link to the Daily Express, notice the headline under "Related Articles": The Kink's legend's shock claim: I had a message from aliens.

He said: “You have an experience with a UFO, and you keep those feelings, and then it gets into your subconscious and super-conscious.

“When I investigated what those feelings could be, when I got really into ufology, I could’ve sworn I was having connections with the Dog Star, with Sirius.”

Maybe this guy should do a musical collaboration with R.U. Sirius.

I'm a huge Kinks fan. Arthur is my favorite album but Muswell Hillbillies holds a very special place as well.

I remember a friend of mine showing me an interview wherein Dave Davies had said his favorite books were Raja Yoga by Swami Vivekenanda and The Book of Thoth by Crowley. Raja Yoga was Crowley's favorite book to recommend for people to gain an understanding of yoga and scientific illuminism (aside from his own works, of course). I'm not sure if this was the original interview but I did just find this one that is pretty interesting:http://www.mojo4music.com/1031/dave-davies/

"Celebrities who are RAW fans' is kind of a recurring theme at this blog, so I would have posted even if I had no idea who Dave Davies was, but I really like the Kinks, too. They seem real in a way that many rock stars don't, and they write about things that many musicians wouldn't think to talk about. This may seem like a trivial example, but who else would write a song like "Autumn Almanac"? And see the Dave Davies Wikipedia bio for background on "Susannah's Still Alive." I'm grateful to Jesse for pointing this out to me.

Some of the albums I enjoyed were "Kinks Kronicles," "Something Else," "Low Budget," "The Kinks are the Village Green Preservation Society," "Misfits," and, yes, "Arthur." I somehow missed "Muswell Hillbillies," but that is an oversight I apparently need to rectify.

You definitely should rectify that. I think it's their best album.

Schoolboys in Disgrace is my favorite. "You're much too dumb to educate you're going to grow up illiterate!"

I've never seen them live! What album were they touring to support?

I saw the Kinks live back in 1984. The Romantics were the opening act. The album supported on this particular tour was State Of Confusion or something like that. Great show from what I recall...