Please publish all of the forewords 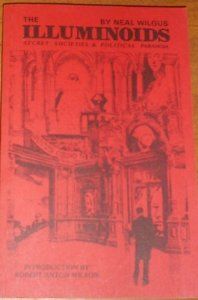 The Illuminoids by Neal Wilgus, one of many books featuring an introduction by Robert Anton Wilson.

The Robert Anton Wilson memorabilia auction on Ebay recently sold a collection of letters by  Philip K. Dick, and Michael Johnson posted a pertinent comment in a recent posting on this blog:

"That particular volume of PKD Letters 1977-79, has an Intro by RAW I've never read. Used copies at Amazon for $90. The nearest library to the San Francisco Bay Area (where I live) that has it is in Portland.

Michael raised something that I'm interested in, too. Robert Anton Wilson wrote many introductions for various books, and the ones that I've seen are quite substantial. It's expensive and difficult to read these things, unless pirated copies are posted on the Internet. It would great to gather all of these together in one volume, perhaps with an editor's notes on where they first appeared, what the literary and historical context was, etc.

I wrote to Rasa about this some weeks ago, and he said other folks have suggested it, so I know it's on the radar screen at Hilaritas.
on April 03, 2017

Here are some introductions and other contributions listed, which are not on the bibliography list at rawilsonfans.org
http://biblioarchy.blogspot.co.at/2006/06/robert-anton-wilson-mystery-auction.html

Wow! Thank you Martin. Will do a separate post on this.