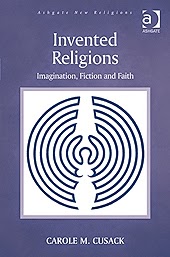 Last year, I read Carol Cusack's Invented Religions: Imagination, Fiction and Faith, her history of modern religions such as Discordianism, the Church of the SubGenius and the Church of All Worlds.

J. Christian Greer, a Ph.D. researcher at the University of Amsterdam, who has taken part in the Illuminatus! discussions as JCG,  has published a review of Cusack's book for the latest issue of "Correspondences," an "online journal for the academic study of Western esotericism." All of the journal's contents are made available for everybody online — there's no firewall.

Greer's review finds Cusack's book a useful early foray into the subject of these odd religions, but he also has criticisms:

Cusack argues for the typological designation 'invented religion'  by way of illustration with chapters dedicated to Discordianism, The Church of All Worlds, the Church of the SubGenius and a final concluding chapter on Jediism, Matrixiism and the Church of the Flying Spaghetti Monster. As it is the first scholarly study devoted to these religions, the book marks a notable contribution to the study of new religious movements. Furthermore, her pioneering analysis convincingly challenges the tendency to dismiss religions that openly incorporate fictitious (and humorous) elements into their worldviews. Despite these obvious virtues though, Invented Religions suffers from two serious flaws: first, large portions of it are not sufficiently grounded in primary source research, and second, Cusack's ahistorical, top-down approach distorts the highly idiosyncratic nature of these religions to suit the 'invented religion' typology.

Greer's review was particularly interesting to me in that it attempts to explain the differing agendas of Discordianism and the Church of the SubGenius. Really, read the whole thing.

Mr. Greer's biography page is here. and I intend to explore his papers and conference presentations.  While Mr. Greer is still working on his Ph.D., he already holds three other degrees, including a master's degree in "hermetic philosophy and related currents."

Sounds to me like Greer is accusing Cusack of taking the “Old School” academic approach to religions, i.e., a non-participatory approach that went out of fashion in the Sixties. As his bibliography shows, Greer has been doing a lot of research in the “zine scene”, and thus is in a position to complement Cusack’s approach.

One other thing: the June publication of the last volume of Bill Patterson’s biography of Robert Heinlein is undoubtedly going to cause a lot of speculation about the origins and meaning of Stranger in a Strange Land to be irrelevant. It should be interesting….. .

That's a great observation about Stranger in a Strange Land. And don't forget that the editor who worked on the book is David Hartwell, who edited many of Heinlein's books.

The contrary clowns of Native America are a conflate of many favors of sun worship-discordianism, (as oppossed to cross discordianism) and academically documented. Not in a Gregory Bateson fashion, too bad, but the papers are on wiki I believe.
If you review what initial subtleties were overlooked in the native discordianism of the plains Indians, it can give a glimpse of what how misunderstood we can be.