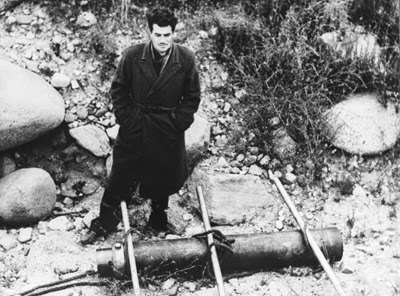 An archival NASA photo of Jack Parsons, at a test site, with a Jet Assisted Take-Off canister, a technology he helped develop.

A piece in the British edition of "Wired" magazine, "Occultist father of rocketry 'written out of Nasa history,' tells the story of Jack Parsons, the early rocket scientist and NASA founding father. I'm not clear why it was published in the Brit Wired and not the one in the USA.

lt's an interesting article, but it has quite a few typographical errors, and unfortunately not a few mistakes, some of which are pointed out in the 23 comments that were posted on the piece when I accessed it. For example, it is apparently not true that NASA ignores Parsons' role in its past. On one of the alleged mistakes, however, it appears that the article's author got it right: Parsons believed his magic had summoned his new girlfriend, Marjorie Cameron. (See the Wikipedia piece referenced below.)

Here is an interesting sentence from the piece that is not disputed by any of the commenters: "Parsons came to believe in magic, a force that he felt could be explained through quantum physics, as espoused by Thelema's founder Aleister Crowley."

There are at least a couple of biographies of Parsons: The Wired piece cites biographer George Pendle. Another Parsons bio, Sex and Rockets: The Occult World of Jack Parsons by John Carter, has an introduction by Robert Anton Wilson.

Wikipedia has a long bio of Parsons, with 190 footnotes. I was amazed to see that Parsons used music by Sergei Prokofiev to accompany one of his magic rituals; I'm a huge Prokofiev fan.
on May 03, 2014

The title may work better, further from California, he had 'moonparts' named after him, but Parsons was never denied or written out of history, only tabooed from society. As Crowley was. As Magick is, as 'the witchcraft' will always be denied. When it is accepted and understood by society, it is not Magick any longer. What was science to Parsons, is still fantastic magic to many scientists working hard to save the world today. Does Jim Parsons, or the rest of The Big Bang Theory cast pay homage to Jack, ever? If not, then rest assured, the title is accurate.

Was reading Jack Parsons and the Fall of Babylon by Paul Rydeen last night (synchronicity?). Here is some more info:

Fortean Times also ran a great article about Parsons with a wonderful cover illustration that is worth tracking down.

The founder qua profiteering prophet of Scientology has a whole history of weirdness to his legacy, but his role as "Frater X" in the Babylon Working is, by far, the weirdest...