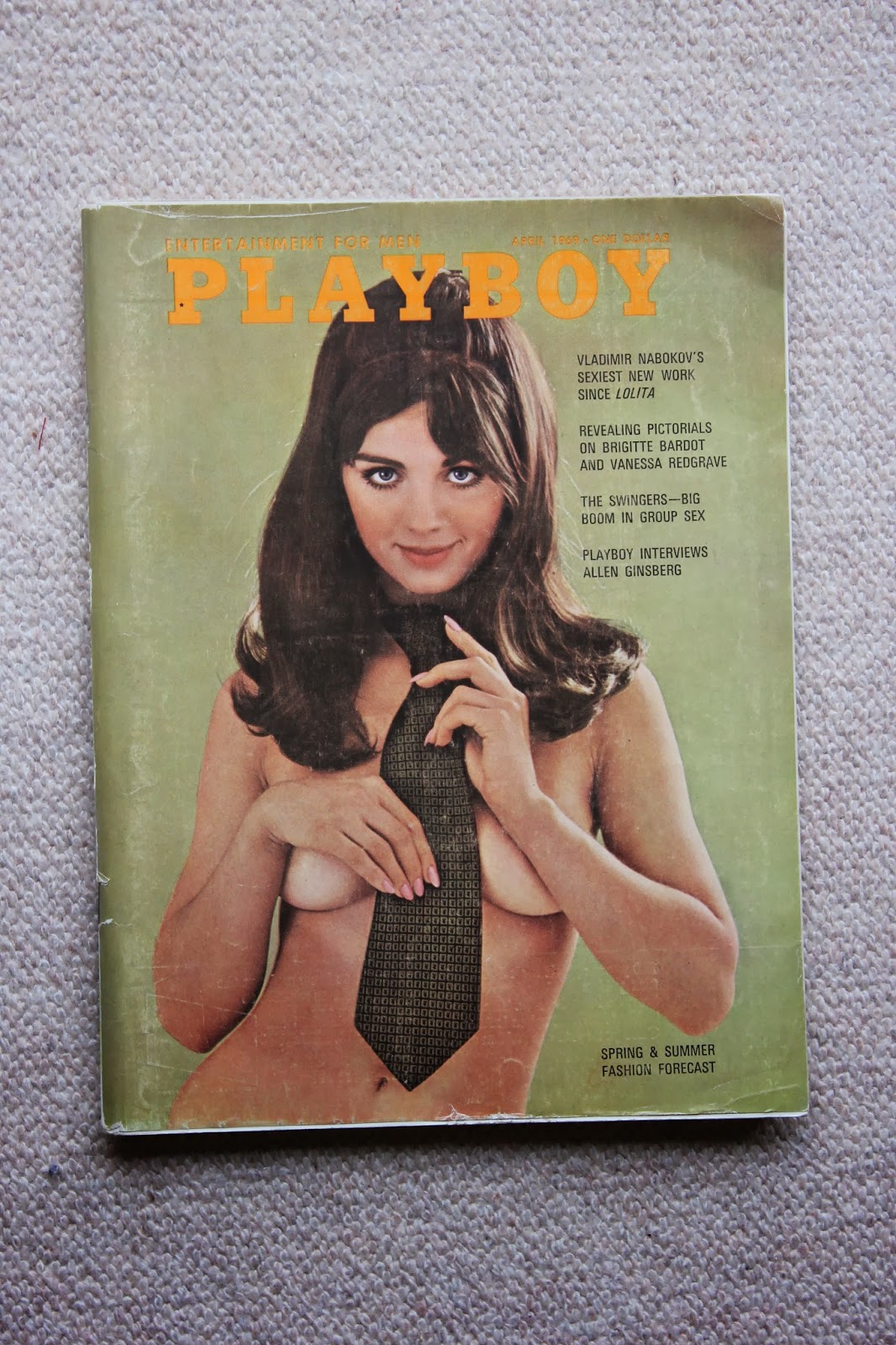 Page 13, "we're closer to the pet shop here," to Page 23, "rather close to the Weatherman faction." I'm using quotes as well as page numbers to make things easier for folks who may be using ebooks. -- The Mgt.

This is the section in which Saul Goodman and Barney Muldoon begin examining the memos to Joseph Malik, editor of "Confrontation" magazine, giving background to the magazine's mysterious Illuminati project.

Page 20 cites a letter and answer that appeared in the Playboy Advisor column for the April 1969. For those unfamiliar with Playboy, this is the feature in which readers pose questions about stereo equipment, women, tipping, etc., and the gurus of cool at Playboy reply with advice. (Well, in 1969 they probably seemed cool.) I don't know if the column still runs now (in many ways, the magazine is kind of shadow of its former self) but for years, the magazine would send a personal reply if you mailed it a self-addressed stamped envelope.

Questions about the Illuminati are kind of a switch from the feature's usual topics. It turns out that it's not a coincidence that Wilson and Shea worked at Playboy when the letter and the answer to it was published.

Illuminatus only gives part of the letter, but here is the complete letter to Playboy magazine, courtesy of Jesse Walker, which I previously posted about. Walker, who researched Discordianism for his latest book, says the "faux letter" actually was written by Wilson, possibly in collaboration with Kerry Thornley; RAW also wrote the reply.

The centerfold in that issue was a Ms. Lorna Hopper from Texas and Wikipedia, which tracks these things, says that she is now 63 years old. 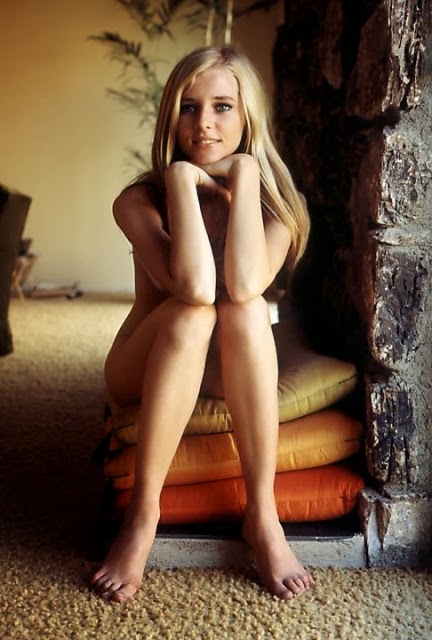 Nick Helweg-Larsen tracked down a copy of the magazine and kindly sent me some images from the issue; some offer a clue on why "Playboy" was considered interesting in its heyday. As you can see from the cover image Nick sent me, above, the cover was not aimed strictly to attract the attention of the intelligentsia, but it plugged an Allen Ginsberg interview and a Vladimir Nabokov piece. 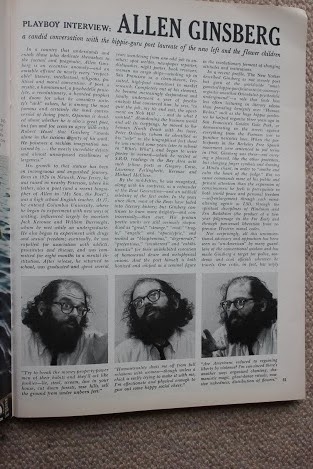 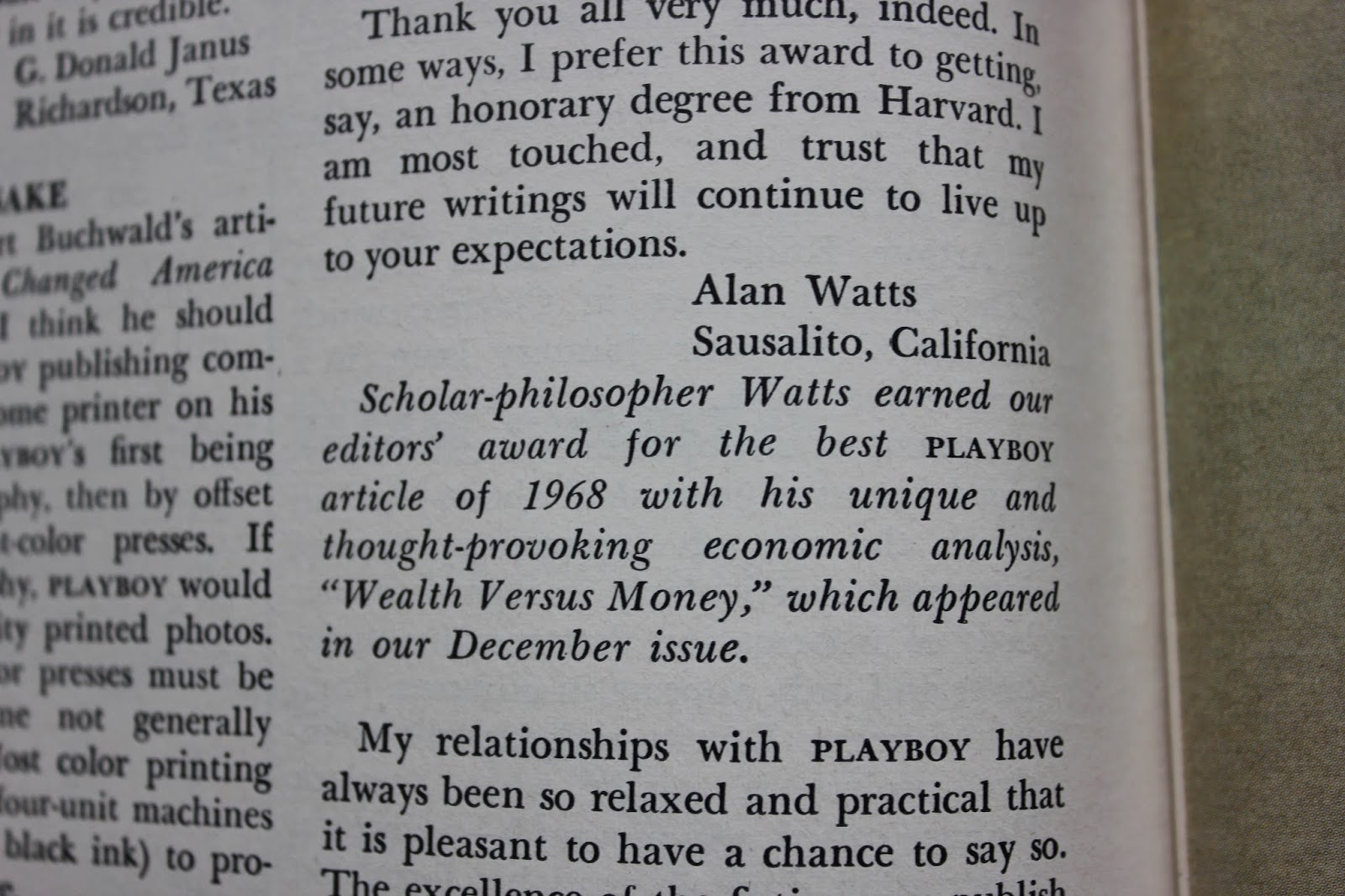 "THIS PHONE BOOTH RESERVED FOR CLARK KENT" (page 23), this is from August Personage, not Markoff Chaney (see Page 27). The way that the bits tie together to construct a narrative resembles Joyce's

Many people believe that Arkon Daraul was really Idries Shah.

Carmel was Wilson's landlord. He used to let himself into their apartment and look around when the family was out.

Lehrman and Robinson are Tuckerized Playboy editors. I know little about Nat Lehrman. Frank M. Robinson has written books of and about sf, particularly The Power. He is this year's Special Guest at the Nebulas. When Playboy offered him the Playboy Advisor column he said, "Do you know that I'm gay, and is it a problem. They replied, "Yes and no."

Earlier today I left a comment in the Week One discussion about a possible connection between Fernando Poo and Phoenix Park (from Finnegans Wake). Similar alliteration, same number of total characters (11), and both involve military/soldiers. Going off all that...

The "Fernando Poo" coup gets explained this week. Illuminatus! says that the obscure island's capital city is "Santa Isobel" (p 18). However, Fernando Pó's capital was actually named "Santa Isabel." The change from Pó to Poo might be for the potty humor alone, but why change Isabel to Isobel? Because Finnegans Wake.

The female lead of FW is named Anna Livia Plurabelle--she's the fairest of them all. If the Golden Apple (Kallisti) belongs to anyone, it's her... 'Belle/bell/bel' appears all over FW. Joyce even misspells words to intentionally fit it in. "Umbellas," for example. There's Plurabelle, Babel, Abel, "A bell a bell on Shalldoll Steepbell..."

Both Isabel and Isobel easily invoke ALP of FW. So why bother shifting from Isabel to Isobel in the first place, if they're both already Joycean with their 'bel' suffixes?

In FW, ALP's daughter's name is Issy. Joyce uses her to retell the story of "Tristan and Isolde." It's one of the major stories within the story of stories. And even in Book III, when HCE and ALP are manifest as Mr. and Mrs. Porter, their children (Shaun, Shem, and Issy) are actually named Jerry, Kevin, and Isobel. A portmanteau of Isolde and Plurabelle.

The Fernando Poo-Phoenix Park connection may or may not exist. I don't know. It seems somewhat plausible... but with the Wake, you can see anything.

But, either "Santa Isobel" was a typo missed by the Roberts and their editors or it was intentionally spelled differently. If it was intentional, well... there's no doubt Wilson was familiar with Joyce... and there's plenty of Isolde/Belle allusions throughout FW...

If I'm not crazy for seeing the change from Isabel to Isobel as being connected with FW, then maybe the Fernando Poo-Phoenix Park connection isn't too crazy either. Whaddya Popes think?

Daddy Eroshka: I think RAW would've admitted your FW-Illuminatus! correspondences, even if he hadn't seen them himself when he and Shea wrote he thing. (The age difference between Rebecca and Saul, her background, his status as detective, their happy sex life together: I can't see the Jew-Bloom and Molly correspondence as all that edifying, as someone argued for last week, although I think the observation valid.)

I think it was my second reading of Illuminatus! when, after reading all sorts of stuff on valid and sound inferences and logic, Eco's ideas about "paranoid overintepretation," Charles Sanders Peirce's ideas about semiotics and how "abduction" works, etc: that I started to pay very close attention to Saul's "intuition" (p.23) and his thinking processes.

He's indeed a good man, but even good men seem prone to really fanciful thinking, even if sharp, rational-logical thought is what they're supposed to bring to their jobs. (Is Rebecca more of a sound thinker about "who" the Illuminati "really" are?)

Last week the scene where we first encounter Saul and Barney at the Confrontation bombing scene? There are "shadows" like in Charlie Chan at the Wax Museum, which you can watch on YouTube. Those Chan films are surreal to me: gawdawful horrid caricature of a inscrutable Chinese man who somehow knows how to solve crimes.

Saul seems to have been framed as a short, Jewish version of Chan...but his intuition does NOT work like Chan's does in the movies. Not at this point in the book, at least.

Memo #2 Typo:Akron s/b Arkon
Nice tip on Idries Shaw being the real author. I have his 'The Way of the Sufi' on my to be read pile and will re-read 'A History of Secret Societies' when I have the opportunity.
(So many books-so little time/Currently reading Don Quixote-Cervantes)

Scott: I'd be interested in hearing about any resonances you find between Cervantes and Illuminatus!

Apparently the rumor that Idries Shah really is Akron Daraul is a strong one; does anyone have any good stories about this?

re: Encyc.Brit: sheck the Wiki for the 1903-74 period: when Americans dumbed it down for higher direct-marketing sales, but the 11 ed was/is still talked about for its quality. This was the edition that Aldous Huxley read cover-to-cover: the entire 11th edition, A-Z. He even had special carrying cases made so he could travel with those encyclopedias.

RAW mentioned a few times that Arlen liked to collect sets of encyclopedias. RAW often commented on how instructive it was to find competing "facts" in different volumes of reference books.

Isn't August Personage the person who is very conscious of the squirrel on the night of April 23? (or is it the morning of the 24th?)

@Daddy: I think the cardinal condition of the law of fives/the collective unconscious/realm of idea(l)s/morphogenic fields/Virgilian fortune-telling applies to many parallels in Illuminatus!. Isobel-probable, but ultimately unsure. Phoenix Park-less so, but still possible. As Michael said, R.A.W. would probably admit to any parallels regardless of intention while writing. Trust the demon, as the gothic Bill Faulkner would say. Side Note: The Muppet is great.

@Drew: April 23rd is not an element of the 23 enigma but Shakespeare's (alleged) birth and death date. The trilogy is full of Shakespearean references but this seems the first.

Quick Edit: Not only an element. Whoopsie.

I'm currently reading a bio on Allen Ginsberg by his archivist Bill Morgan. It's very good.

The sentence on p. 14, "Hold on to your hats" indicates Kether, the title of this chapter as does the shifting pov mentioned above.

A scattering of notes --

The "Provos" referenced in the rubberstamp were a mid-60's radical movement in the Netherlands.

As far as I know, the bibliography in Joe Malik's notes is completely real. And only one or two were written by Shea and Wilson.

Playboy *was* cool. Ginsberg, Watts, and Nabokov in one issue?
Wilson got nailed once when he wrote a letter himself and used the name "Indohl Ringe".

competing "facts" in different volumes of reference books may be one of the origins of the book. Istr that when the BI began turning up in the nut mail, Wilson did a routine library search -- and the usual authoritative sources had very different stories.

Oh, and Idries Shah's books are fabulous. Just don't believe anything he says about himself or his lineage. I got turned on to him, indirectly, by Arlen.

"Malik" is specifically the Arabic form of the word, not a generalized Semitic form. for example, the Hebrew cognate is "melek".

Edward Luttwak. I used to have a link to a good post on Luttwak but the blog it was on went away, unfortunately. Mr. Johnson has a bit of a rant about him in a relevant post here.

Memo #1 - 23rd July. I forget which year RAW had his Sirius experience. It seems that he either wove Sirius in later, before publication or foresaw it.

Looking at a map of Vegas. Near Date Street is one Pyramid Drive.

I like how FUCKUP is a kind of pre-internet programmable computer.

@ Neil and beowulf, from later in the book regarding Malik:
Their founder," Mama Sutra said, "was the first man to think rationally about the lloigor. He
realized that they were not supernatural, but just another aspect of nature; not all-powerful, but just
more powerful than us; and that when they came 'out of the heavens' they came from other worlds like this one. His name has come down to us in certain secret teachings and documents. It was Malik." "Jesus," Danny said, "that's the name of the guy whose disappearance started all this."
"The name meant 'one who knows' in the Carcosan tongue. Among the Persians and some Arabs
today it still exists but means 'one who leads.' His followers, the Illuminati, are those who have seen the light of reason— which is quite distinct from the stupefying and mind- destroying light in which the lloigor sometimes appear to overwhelm and mystify their servants in the Cult of the Yellow Sign. What Ma-lik sought, what the Illuminati still seek, is scientific knowledge that will surpass the powers of the lloigor, end mankind's enslavement and allow us to become self-owners instead of property."