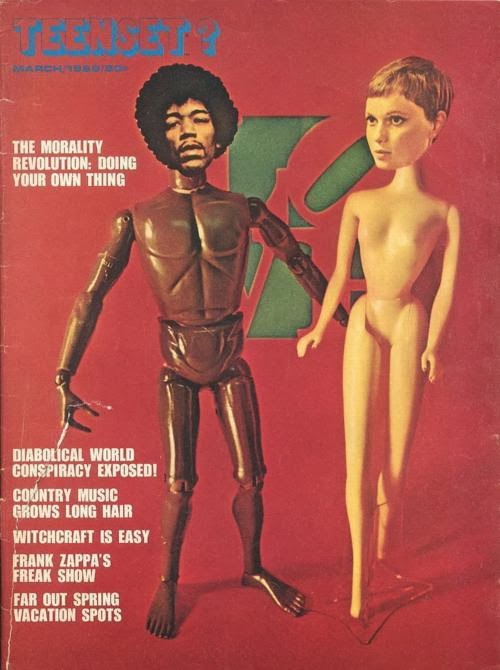 Page 32 "George's cellmate in Mad Dog County Jail had a skull-like face" to Page 42, "the monster who founded the order of the Illuminati on May 1, 1776."

Here is the section where George Dorn involuntarily goes through an initiation, courtesy of the mysterious sheriff of Mad Dog, Texas.

Page 37, Lorelei, Rhine maiden who lures men to their deaths.

Page 40, Teenset, March 1969 At the top of the page is  the cover of the magazine cited in Memo No. 5. As I detail here, I found the image after reading a comment from Michael Johnson, who says the article was written by Robert Shea. I do not have the text of the article, but the cover headline says, "Diabolical World Conspiracy Exposed!"

Page 40, as nice parody of the authoritarian mind set. "The cult terrorized the Moslem world until Genghiz Khan's Mongols brought law and order to the area. Cornered in their mountain hideaway, the Hashishim dope fiends proved no match for the clean-living Mongol warriors ... " Of course, a large part of the Mongol "law and order" was military brutality and wholesale massacre. Compare the remark of a tribesman in what is now Scotland in Tacitus' Agricola about the Romans: "They create a desolation and call it peace."

"Since "flower power" is a modern concept advanced by hippies, it is likely that Shea and Wilson intended this as a joke, although, characteristically, they never say so. They attribute the disclosure of this slogan to an article by Sandra Glass in the magazine Teenset for March 1969. Another possibility is that the rose and lotus flower are an important symbol of spiritual development in both the western and eastern mystery schools.

Lots of great material in this section.

p.36:"Why it's lucky for you you don't meet any of our real right-wingers, like God's Lightning for instance"

God's Lightning corresponds with Kether. The qabalistic lightning flash that goes down the Tree of Life originates in Kether. "real right-wingers" may seem like a pun for anyone looking to fly.

With that, Shea & RAW both give important sex magick information and show how vital clues can come from anywhere even deceptively simple rock lyrics.

The tantra coincides with or initiates a voyage through a time-tripping visionary sequence of one possible future.

All the sexual stuff with George in jail before that graphically portrays some common "bars" or obstacles to reaching Kether.

The lighter side of Sheriff Jim shines through when he admits to being familiar with and having read the smutty & communist Confontation magazine. Page 36

The inclusion of Nixon in the list of major assassinations must have been wishful thinking at the time. Page 36

Famous members of the CFR - Page 42 (too many to list here), see link at Wikipedia:
https://en.wikipedia.org/wiki/Members_of_the_Council_on_Foreign_Relations

@Oz, good connection b/w "God's Lightning" and the Tree of Life. Just last week, Eric mentioned he reviews Crowley's "777" while reading through Illuminatus! "777" refers to the path from top to bottom on the Tree of Life, top to bottom from Kether to Malkuth. If you don't see it, know the 7s are backwards and stacked on top of each other. Also, I never though to include the rock lyrics as part of the tantric instruction. Duh!

@Tom, I hadn't notice the Hoffman/Hofmann misspelling before. I've made the mistake myself many times. I assume it was unintentional. If it wasn't, "hoff" is an imperative form of "hoffen," which is "to hope" in German. Probably just a typo though.

In the middle of page 38, there's a time shift from the future festival back to the detectives. The amps give out a loud feedback, causing George to wince and others to hold their ears, right as Muldoon's key scrapes and misses the lock to Malik's apartment.

"... when Muldoon returned, looking as if his doctor had just told him his Wasserman was positive." Wasserman is a test for syphilis.

In Memo #5 from Teenset by Sandra Glass, the name "Simon" appears twice. "Simon proceeded to tell me... Simon told me..." Is this Simon Moon? So we're watching Mary Lou learn from Simon, and introduced to an earlier "graduate" of Simon's tantric mind-expansion program? According to Glass in Memo #5, Weishaupt supposed achieved illumination on Feb. 2, 1776. Someone noted earlier that Feb. 2 was Joyce's birthday.

William Buckley, Jr. is mentioned in the CFR conspiracy introduced on the bottom of page 41. Buckley wrote against Communism, and in Finnegans Wake, there's repeated reference to a Mr. Buckley shooting a Russian general.

Also, kind of jumping ahead, but George's cellmate is named Harry Coin. 500 pages from now, we learn whether or not we can trust anyone with the initials H.C...

Another coincidence with Ginsberg's poetry. A couple of hours after posting here about the lightning flash I came across this line in a poem called Sunset:

To me, the whole poem relates to Kether.

This week's entry, and the earlier weeks, are like a really great panel at a science fiction convention. I have as good a panel of experts as you'll see at any worldcon or Readercon.

I haven't read the trilogy since the '80s, and I'm following the weekly progress and not reading ahead, so I can't remember if the barking dogs are explained.

But they make me think of the Goetia, a book of demons. Some people claim that the title comes from the Latin verb for "howling."

Also, the Greek goddess of magic, Hecate, was associated with dogs. Her appearances were sometimes heralded by the sound of barking dogs.

The translation is not quit correct. Better would be "Eternal flower power", especially as the phrase echos Goethe's das Ewig-Weibliche at the end of Faust.

"Schlangenkraft" does mean "Serpent Power", a reference to Kundalini, and possibly to The Serpent Power, one of the books on Tantra by Sir John Woodroffe, aka "Arthur Avalon".

pg. 32. "There are periods in history when the visions of madmen and dope fiends are a better guide to reality than the common-sense interpretation of data available to the so-called normal mind. This is one such period, if you haven't noticed already."

pg. 32. "The original seed was part of that strain recommended by General George Washington in the famous letter to John Sinclair..." - Anyone know where this letter can be read?

pg. 35. "Stay here and take care of that other little matter" - presumably the fake hanging of Harry Coin.

pg. 39. @ Boris - "Not a godamn dog anywhere in the whole apartment." - The sound of the dogs is explained in the Appendices at the back. It's an lp of the sound of the wolves.

pg. 40/41. Mentioned on Tom's blog before - the humour of mentioning the clean-living Mongol warriors, and Beethoven having a poster above his piano.