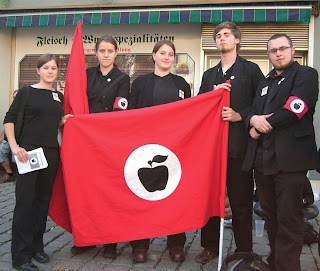 Yes, the colors are reminiscent of a former German political party, now fortunately in decline. But you are looking at members of the German Apple Front, a German political movement that satirizes extreme right-wing groups.

Here are of the principles of the Front Deutscher Apfel, translated by Google:

1 No alienation of the German fruit stand more! In the past, purely German fruit again and again contaminated by the grafting of alien species. Stop it!

2 Tropical fruits out! There can not be that German children grow up with bananas and oranges and do not appreciate the nutritional value of a good German apple or a pure juicy pear. Therefore: close borders for foreign fruit!

I don't know if these folks have any interest in golden apples, but I noticed that the Wikipedia article refers readers to the article on Discordianism. The Boskop apple, the preferred apple of the movement, is sometimes a golden color. The group's official salutation, "Boskop Heil!", may be translated as, "May the Boskop (apple) be with you!"

Here is a sentence I liked in another article about the group: " The Apfelfront is now demanding infiltration by a government spy, saying that it will give the organisation credibility."
on December 13, 2013