A RAW quote from Wales
I've wanted for years to visit Wales, so I was pleased to run across a blog written by a Welsh librarian who is a big Robert Anton Wilson fan. (The header of Anon the Librarian's unattributed ideas blog refers to Wilson's Snafu principle that "Accurate communication is only possible between equals," so I don't think I'm going out on a limb here.)
Anyway, Anon's latest posting has a particularly choice Wilson quote:
"When I was working on my historical novels, my wife used to collect old encyclopedias. Every time she was at a bookstore they had an old set of encyclopedias and she’d buy it. And so we had about eight different sets of encyclopedias in the house. So every time I wanted to look up a historical detail, I’d look it up in three or four of the encyclopedias and always—it didn’t take as much as three—usually only two I’d find a disagreement.

"If I went through all eight encyclopedias, I’d find eight different answers. Like how old was Mozart when he wrote his first symphony? – he was either 7 or 8 depending on which encyclopedia you’re looking in. This is what provoked me to what I call “Wilson’s 22nd Law: Certitude belongs exclusively to those who only own one encyclopedia. If you own more than one you’d be thoroughly encountering a certain amount of doubt and a certainty about things in general.” There is no one reliable source; there are a dozen different sources all claiming to be reliable. You got to use your own ingenious mind, and your own talent for analysis and skepticism to try and figure out “Which one of these guys really sounds like he might know what he’s talking about?” or “Which one should I bet on?”

"Every act of perception should be regarded as a gamble. From the experiments I’ve done and the experiments I’ve led and in my workshops and seminars, that has become overwhelmingly obvious and true to me. Every perception is a gamble.The major problem with the US is that about fifty percent of the population who at least thinks The Bible has all the answers. And then there are libertarians who think Ludwig van Mises has all the answers—except for all the ones who thinks Ayn Rand has all the answers. If you think there’s one book that has the answers, you’re never really going to discover anything and you’re never going to think an original thought. If you find out there’s twelve books with different answers you’re almost forced to start thinking. So I feel the internet is forcing more and more people to do something they have never done in their lives before and just try to make an independent judgment and how to judge between alternatives."

The provenance of the quote unfortunately isn't clear, as you can see from the discussion in the comments between Anon and myself.

The lines about research with encyclopedias was in an interview RAW did with Paul Krassner around 1999 or 2000. See Email To The Universe, pp.240-241. I'm too lazy to consult my notes on the perception/gamble stuff, but it's a view that was expressed many times, with slight variations. 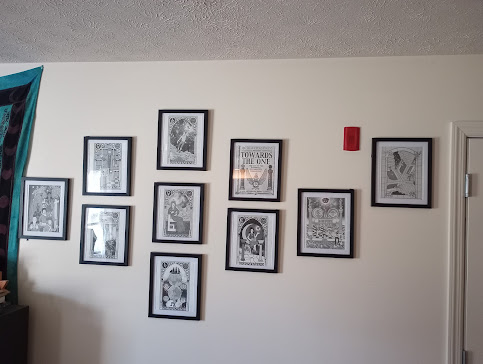