How did you start reading RAW? 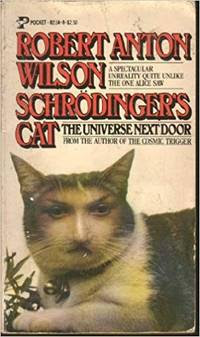 As an experiment in retention/understanding I've been listening to the new Hilaritas Press podcast on Beethoven in small sections, rather than all the way through in one sitting.

Early in the podcast, Mike Gathers asks Eric Wagner how Eric began on reading Robert Anton Wilson, and Eric responds that he began with the Schroedinger's Cat trilogy (as the original three mass market paperbacks), then read the Illuminatus! trilogy, then Masks of the Illuminati. Mike mentions that he found Masks an accessible way to begin with RAW, and that he worked up to Illuminatus!, which he found difficult at first.

I began with Illuminatus!, which I found totally absorbing; I simply cannot recall how I got interested in it, whether it was recommended to me and or I ran across it; I did early on have friends in college who also read it. Then I went on to everything else I could find. I do regret that I took a long time to get around to reading Robert Shea's solo works; I didn't start on his historical novels until many years after Shea had died.

I also started with Illuminatus!, which I enjoyed a lot despite most of the references flying way above my head. I did not find it very difficult to read, and it made me look for more books from RAW. I would probably find this trilogy much more rewarding now that I am a more seasoned RAW enthusiast. Like with Joyce, there might be a high level of re-readability in Illuminatus!.
If you know what the Bobs are talking about, you might feel like you are part of the Discordian conspiracy, which I see as a pretty smart and smooth move on their part.

I found Masks at the bottom of the science fiction paperback bookcase at my public library when I was 15. I trusted the publisher, Simon & Schuster’s Timescape imprint, which had done some of Philip K Dick’s last books, and I knew who Albert Einstein and James Joyce were. I did NOT know who Aleister Crowley was, but boy did I learn…

I started with Cosmic Trigger I in 1980 or '81 I think. That instantly turned me into an enthusiastic RAW reader. His books were quite difficult to get where I lived and toured in Western Canada. I snapped them up as soon as I found them, most got acquired on a literary and music pilgrimage to New York and later when I moved there. Illuminatus! was the second one I found. I've never hesitated once buying any of his titles.

A bloke in Europe said...

I have started with Illuminatus! as well.. Was given the book by a friend in Paris with the words - "everything that you have read before is shit. read this".