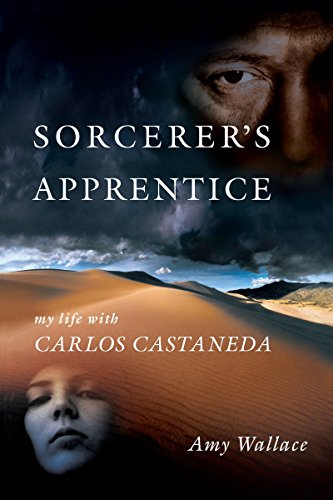 [After I posted Sunday on a new book, put out by Rasa's digital design and publishing company, that describes a trip to Mexico to meet with the "real Don Juan" from Carlos Castaneda's books, Michael Johnson posted a long and characteristically interesting comment, which I am reproducing here as a separate blog post, because I want people to see it. Michael posted two follow up comments, which I've merged into the original in what I hope is a logical manner; you can view the original post for context. My illustration is the book Michael particularly recommends. Meanwhile, I have loaned my Kindle of the new book, Illuminating Don Juan by Peter Marquis, to Apuleius Charlton, who was the first to offer to review it. Later I will lend it to Oz Fritz and to Michael, if he wants to read it also.

Note that Peter Marquis also posted a comment: "I am the author of Illuminating Don Juan. I think I got to the bottom of 'who' they were. You decide.

"But it is much larger that that subject. So while the readers are interested in such things, it is ultimately only a vehicle for our real message. We are 'making sense of the world' for you, today. It isn’t about Carlos Castaneda. Please keep this in mind."

For other comments, go back and read the original post.

I have to chime in here and steer some of you to Amy Wallace (of the Wallechinksy writer-family) and her book Sorcerer's Apprentice: My Life With Carlos Castaneda(2003). 'Nuff said.

Also worth a look would be Richard DeMille's The Don Juan Papers. (I like this source, but to sweeten the situation: DeMille was the adopted son of Cecile B. DeMille, and are you ready for your close-up? Richard DeMille was L. Ron Hubbard's assistant at the birth of $cientology. I will leave further High Weirdness to others here..)

Castaneda's PhD thesis became a best-seller, basically. That, I think, should tell us a lot about the book's time and place.

Castaneda got his PhD in Anthropology at UCLA, and one of his advisors was Harold Garfinkel, one of RAW's favorite Sociologists. Garfinkel was a student of Alfred Schutz, who studied Phenomenology under Edmund Husserl himself. Schutz effectively exported Phenomenology into Sociology, and in my weirdo take on such things, it's where Phenomenology was meant to be. Garfinkel invented Ethnomethodology out of that, while Berger and Luckmann wrote the Social Construction of Reality: A Treatise in the Sociology of Knowledge, one of the most psychedelic (to ME) non-fiction books I've ever read, and I am always returning to.

At present, my main model of Castaneda is that he never went to the Sonora Desert and probably wrote all the Don Juan books from sources in the library at UCLA. When he submitted his thesis, he was asked to show his field notes, and basically: the dog ate 'em, and they signed off on his degree anyway.

Joyce Carol Oates was one of the first to read Castaneda and detect that it's all fiction. I've got a letter from Douglas Hofstadter to Marcello Truzzi, in which Hofstadter has CC as "a fraud."

It's been fascinating to me to accumulate many years of notes on authors who bought Castaneda at his word; others who saw through him at some point, and then others who seemed to see the value in the work, even if it was a monumental put-on. I suspect RAW eventually caught on, but he never wrote about that. One of his acolytes, Adam Gorightly, has a stimulating take on CC, found in The Beast of Adam Gorightly, "The Trickster of Truths", pp.130-151.

As of 1974, RAW seemed to think Castaneda's work was authentic, at one point seeing the field of Anthropology as "BC": Before Castaneda. EX: Sir James Frazer was BC.

Now and finally: my main model may be wrong. WRONG!!! Of course! (However, for me: the Amy Wallace memoir was the coffin-nail.)

Psychiatrist Arnold Mandel suspected that "Don Juan" was based on the founder of Ethnomethodology, Harold Garfinkel, who Castaneda studied under at UCLA. And soon, after Castaneda became a "star", Garfinkel - whose students competed against each other for his favors - felt something like remorse for signing off on his PhD. Another of the advisors was Anthropologist Robert Edgerton, whose book _Sick Societies_ I found really interesting.

Garfinkel died in 2011, and here's a "memory" of him by one of his students, and it mentions DeMille's book, _The Don Juan Papers_, which is a compendium of many authors weighing in on the veracity of CC's work:

I was happy to see that Chad Nelson's wonderful work in fortifying RAW's Natural Law, Nelson saw fit to included RAW's essay, "A New Writer: F.W. Nietzsche," which originally appeared in New Libertarian in 1984. In writing about Nietzsche, RAW's really writing about himself, as most of you know.

Anyway, in that piece, RAW suspects Garfinkel, "who was Castaneda's sociology teacher and the possible original of Don Juan." (p.132 in the Hilaritas Press edition)

BTW: RAW thought Garfinkel's treatment of the intersex female, "Agnes," in _Studies In Ethnomethodology_, was hilarious, because Garfinkel had to add an appendix to that chapter at the end of the book. During the 8 or so years of studying "Agnes" - who Garfinkel was interested in as a case of "passing", he and his colleague found out she wasn't passing at all: she'd started taking her mother's estrogen at age 12, and really wanted the surgery to become a full woman. She got it. Garfinkel and his colleague Stoller were taken for a ride. There's an audio talk of RAW out there somewhere where he talks about this case and has a hearty laugh about it. The "Agnes" case is seen by many as the first "study" of a transsexual's transition, and clearly, from 1959-1967, Garfinkel and Stoller were in over their heads with this stuff. A short film about this came out in 2018, "Framing Agnes" and anyone innarested can watch it here: (The film starts at around 7:50)

I'd like to add that, IF I'm correct about Castaneda, or some variation on that take of mine - look at what he did: a true trickster! A massively successful work of guerrilla ontology!

And it's way too easy from me to imply his mentors were Garfinkel and stacks of books on Taoism, hallucinogenic use of peyote and psilocybin, Heidegger, Zen, anthropological reports on shamans, Native American mythology, etc. (I do picture him holed up in a carrel in the library at UCLA, taking notes from books and inventing all that fiction), but who ELSE were his teachers?

Further complicating matters is Amy Wallace's testimony, which paints Carlos as a sort of Manson-lite (no random killing sprees).

I'm interested in reading Illuminating Don Juan, too, not only to challenge my current main model of WTF was going on with CC, but simply 'cuz I like narratives to get ever-weirder and more complex. Challenging.

Rasa very kindly sent me a pdf of Illuminating Don Juan which I've started reading. So far, it comes across as an intimate, compelling story. It has some of the flavor, harmonics, and atmosphere of the Castaneda Don Juan books which I find pleasantly nostalgic, yet also seems quite relevant to this moment in time regarding environmental issues.

I'm in New York with a few hours off so am about to go on an expedition to one of my favorite bookstores in the world, The Strand, in search of Amy Wallace's book. The continued controversy around Castaneda years after his death fascinates me.

Tom- I don't have a Kindle and probably won't be getting one, as I'm a confirmed close-minded staunch Dead Tree Codex Fundamentalist. But thanks for the offer!

Just to add a bit to this larger bunch of bits: Garfinkel's Ethnomethodology was derived by him from his background in phenomenological sociology, and both RAW and me and many others see it as both 1.) microsociology; and 2.) a meta-critique of the social sciences themselves.

Of the many examples, here's one: students were instructed to go home and pretend they didn't know the meaning of certain words. Mom would say, about something that happened that day, "It's just not right." The student would say, "What do you mean by 'right'?" And it would go on like this until - usually - the student got a "What's the MATTER WITH YOU?" The student was to document the whole thing, as close to verbatim as possible. (Yea, it bears a family resemblance to the Socratic Method, eh?)

Another, paraphrased from memory: walk up to your friend and stand almost nose-to-nose. They automatically step back a bit. You move back in.

[Odd side note: Garfinkel's writing is opaque and most people - even his beloved students - found it very rough-going. And yet: in 1940, he wrote a short story on race relations in the South that won an award, and was followed in the periodical by a story from Faulkner. Garfinkel the fiction writer seems like an entirely different person than Garfinkel the Ethnomethodologist.]

When I hung out with RAW the only day I was able, we talked about this stuff. I suggested it bears a certain resemblance to a lot of the humor on Seinfeld. (There actually was a "close talker" in one episode.) In Seinfeld, "issues" would come up, like, how long do you keep your birthday cards before throwing them away? Is there some sort of "rule"? What's correct? And some times, other characters acted like it was common knowledge what the proper etiquette was, which is absurd, and funny. For Garfinkel, he wanted to "probe" this mundane world that everyone takes for granted.

In Cosmic Trigger vol 2, pp.160-161 (of my olde New Falcon ed.), in an interview with ROC magazine, RAW presents his decision to openly TALK about a taboo subject, conspiracy theories, and noted that just talking about that which is taboo for certain groups got a strong reaction. This is very much like Garfinkel's breaching experiments.

Since RAW died, I've noticed - and this could easily be selected attention, as I'm attending to these ideas very closely - that the topic of consciousness is increasingly receiving adherents of the old quasi-Platonic Mind At Large, as Aldous Huxley thought: consciousness is not an emergent phenomena in the human nervous system (THE dogma of materialist scientists everywhere: it is only in humans, or maybe mammals), but is everywhere, and our brains are merely like radios, receiving a few stations, or bands on the spectrum of available frequencies. Just TALKING about this is still taboo, but increasingly, academics are doing it, if only for the reason that the numbers of "can't be explained", anomalous reports are piling up to a ridiculous level. To talk about That Which We Don't Talk About, will yield data that shows us a lot about the "hidden" aspects of "reality." And...it could open up Science to a new paradigm. It could also heal the rift between Science and the (increasingly moribund) Humanities on campuses.