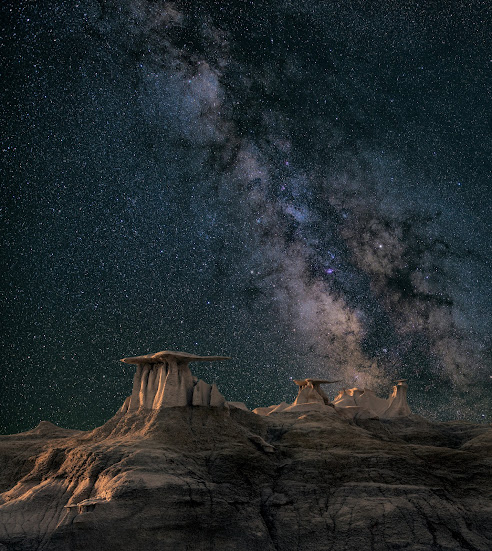 Photo by John Fowler on Unsplash

Chapter 18 is a chapter without any exercises. I like the bit about the "virtually superhuman music" of the fourth movement of Beethoven's Ninth Symphony. There's also some stuff about the brain being turned on by a "non-local information system."

Wilson's account of faster-than-light communication between particles seemed speculative to me, and for what it's worth, when Charles Faris interviewed Jack Sarfatti about this via email in 2016 (for the Cosmic Trigger 1 reading group), Sarfatti backed off from such claims. (Full interview here.)

CF: ERP “proves” that if Quantum Mechanics is “true” this requires instantaneous contact between some particles, even if at opposite ends of Universe.

Quantum entanglement is very fragile, and for particles out in space, the initial entanglement will almost certainly be destroyed by collisions with other particles.

Even if it was not, it is of very little consequence since actual message using entanglement alone is not possible in quantum mechanics.

We now know through the work of Yakir Aharonov, Huw Price, Ken Wharton, and Rod Sutherland, that the only way to correctly understand quantum theory is through OBJECTIVE LOCALLY REAL RETROCAUSALITY in which future "destiny" causes post-determine what happens in the present in addition to the common sense past "history" causes. OBJECTIVE LOCAL RETROCAUSALITY is the only way to understand quantum entanglement without violating Einstein's special and general theories of relativity.

FASTER-THAN-LIGHT NONLOCALITY never happens directly. It is a mirage, the effect of OBJECTIVE LOCAL RETROCAUSALITY as probably first explained in the 1950s by O. Costa de Beauregard as the "zig-zag" also used by John Cramer in his "transactional interpretation." Indeed, so long as the entanglement is not destroyed by environmental decoherence, the statistical correlations do not depend on the space-time separation between the localized strong measurements on each particle in the entangled network.

Quantum uncertainty (e.g. Heisenberg) in the present is only because we must integrate over all possible future destiny causes. Therefore, our quantum theory using only past causes is incomplete as Einstein correctly thought. When one includes future destiny causes "God does not play dice with the universe." However, because quantum theory does not allow stand-alone quantum entanglement messaging, the usual Heisenberg uncertainties apply as a pragmatically useful effective description for simple scattering experiments on dead matter. This situation changes for those degrees of freedom responsible for life and consciousness in open complex systems with long-range quantum coherence (as first discussed by Herbert Frohlich). The situation changes for living matter, which is a POST-QUANTUM THEORY effect.

This is Tom again. My favorite "hippie physicist," Nick Herbert, still seems to hold out hope for faster than light communication, see for example this blog post from 2021.

All this reminds me of the debate many years ago between Isaac Asimov and Arthur C. Clarke about whether faster-than-light travel might be possible with Asimov answering "no" and Clarke "yes."

I talked to Jack about RETROCAUSALITY a few years ago. One reason he is big on the topic is that it seems to add some validity to his claim that he was visited by aliens as a child who told him about his future. He maintains those "aliens" were likely us in the future communicating back along the time line. I am often curious to follow Jack's speculations, but I am always reminded that this physicist also thinks Donald Trump should be God Emperor of the United States... so there's that to consider, I suppose.

To the best of my knowledge, a definitive scientific consensus of how quantum physics works doesn't exist. A friend recently posted of reading an article discussing various things in this field and came across this sentence:

"All we can be sure of is that the universe is far stranger than we can imagine." This seems contrary this phrase from Sarfatti's interview: "... the only way to correctly understand quantum theory ..."

Thank you for the link to the Sarfatti interview in the CT reading group. Regardless of his opinion, I find it nice to be able to check on him 40 years after the facts.

Saul-Paul Sirag had a series of talks with Jeffrey Mishlove for the New Thinking Allowed, see for example this one: https://www.youtube.com/watch?v=I0sqRGsw4jw

A current physicist that also does a great job at explaining quantum mechanic for the layman is Carlos Rovelli. I liked his book Reality Is Not What It Seems.