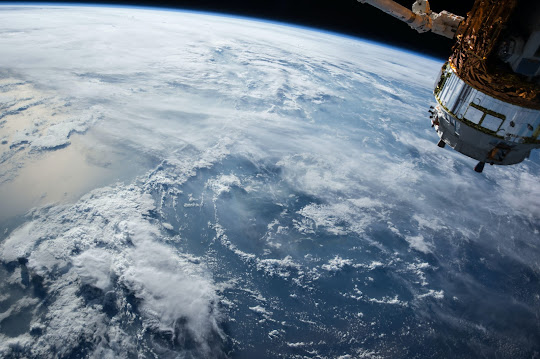 Clouds over the ocean. NASA photography via Unplash.

I am not going to claim to understand Bell’s Theorem or even the basics of quantum physics. Most of what I “know” about quantum physics come from Wilson anyways, so I wouldn’t be adding anything new.

I do teach a little about relativity (the Special Theory, the General Theory is beyond my ability to communicate) and about how theories of physics coexist, due to the virtue of teaching John Higgs’ excellent Stranger Than We Can Imagine every spring. In that book, Higgs explains that our global positioning systems/satellite navigation works on the principles of Newtonian physics, relativity and quantum physics which should be mutually exclusive paradigms.

Without pulling the book off my shelves, I believe it takes Newtonian physics to get the satellites into orbit and keep them up there, relativity for the positioning to be accurate and quantum physics in the computer chips that run the system.

In a profound way, I find this paradox to be of great comfort. I prefer a bit of mystery in the universe, and suspect that the mystery is an inherent part of its composition, at least from our perspective. I’ve never felt much at the end of this book, these last few chapters have passed the parts of the book that have affected my way of living and thinking so dramatically. Perhaps it is my mathematical illiteracy or my inexperience with large doses of LSD or any amount of ketamine that has kept me from palpably understanding the truths in this chapter. (One could also point out I’m obviously not advanced enough in yoga and, knock on wood, haven’t experienced a near-death event.)

In a way, this is an apology that my latest entries are ending on a whimper instead of a bang. This is a life changing book and packs a wallop of psychology and ontology in the opening before floating off into experiences that only some of us have touchstones to comprehend. I have found myself having little to say about Wilson’s writings in the last bits, for which I hope that I might be forgiven. As we approach the end of this long reading group I find myself increasingly wondering “what comes next?” I ask that question in many senses, will Prometheus rise in all of us or will it be like the larger morass of humanity, some firebrands and wise-ones coming into being, teaching and some of us half-listening. Will humanity ever set aside our pettiness, take to the stars and focus on life expansion? When?

A little bit of mystery might be part of the composition ...

The explanation of Bell's Theorem seemed rather speculative, as it seemed to lean heavily on the likes of Jack Sarfatti. Nevertheless, I enjoyed it.

I wonder why RAW has no exercises for this chapter?

This last circuit finds itself being almost by definition beyond words. As the opening quote from Ulysses says, "the ways of the Creator are not our ways". And so as such, I guess that any explanation will have to appear tentative. At least at this point of human evolution.

On the one hand, we could get the idea that C8 experiences are akin to what Mr. Deasy call "the manifestation of God". But at the same time, if it really is "circuits-circuits-circuits all the way" (p.225), then escaping "the confines of the nervous system" would only be the beginning.

Regardless, if indeed the software/information/consciousness is "here, there and everywhere; now, then and everywhen" (p.227), that could account for many so-called parapsychological phenomenons such as telepathy or remote viewing.

I note that if consciousness actually is "expanding to infinity in all directions" (p.228), that would lend credence to the idea that fractals are embedded in the fabric of reality. On a more local level, PR sure does expands one's own consciousness by constantly dropping hints which can be followed in countless rabbit holes within rabbit holes.

I am looking forward to read what Eric Wagner might have to say about this chapter, in particular RAW's reading of Beethoven's Ninth as being about "all consciousness from primitive bio-survival to meta-physiological cosmic fusion." Eric, it was a pleasure to listen to the talk you had with Mike Gathers in the last Hilaritas podcast.

I do not know why there are no exercizes.

I have a layperson's fascination with quantum physics though have little time to indulge.

Wilson ends with "If you really understand the message, you'll invent a bigger and better Future than I have suggested." Perhaps we can consider that the final exercize?

Thank you, Spookah. I enjoyed talking with Mike.