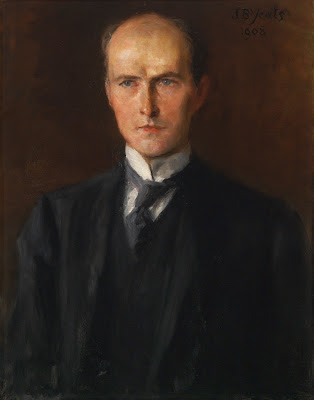 What do James Joyce and Ezra Pound have in common, besides being big influences on Robert Anton Wilson? A guy named John Quinn. In a recent "What I've Been Reading" blog posting, Tyler Cowen explains:

"3. Hugh Eakin, Picasso’s War: How Modern Art Came to America.  John Quinn is the hero of this story.  Who’s he?  He was a wealthy Irish-American lawyer on Wall Street in the early part of the twentieth century.  He supported James Joyce, the various Yeatses, the later-famous Irish playwrights, Irish painters, and Pound and Eliot, all before they became accepted and then famous.  What a talent spotter.  He simply sent them money.  He was also very early on the Picasso and Henri Rousseau bandwagons, most of all in America, where Quinn was a central figure in popularizing, collecting, and displaying modern art.  His is a career to study, and this book is the place to start."

I confess I never heard of John Quinn, but here is a paragraph from the Wikipedia biography: "He was part of the group who staged the Armory Show in 1913, the first great exhibition of European and American modern art in the United States, at the 69th Regiment Armory in New York. Quinn gave practical advice and financial assistance to Ezra Pound and T.S. Eliot. In gratitude, Eliot sent Quinn the original manuscript of his 1922 poem The Waste Land, including Pound's editorial suggestions."

The Wikipedia bio has all sorts of nuggets; Quinn once worked with Aleister Crowley.

Quinn was only 54 when he died of cancer in 1924, a huge loss to literature and art.

Here is John Quinn's May 1917 article for Vanity Fair, "James Joyce, a New Irish Novelist."  It begins, "James Joyce has come to town, and he has come to stay. A new star has appeared in the firmament of Irish letters, a star of the first magnitude."

In 1984, I think, I asked my mom for some T. S. Eliot for my birthday. She got me a copy of the original manuscript for "The Waste Land" with Ezra Pound's recommended changes. The introduction to that book introduced me to John Quinn.