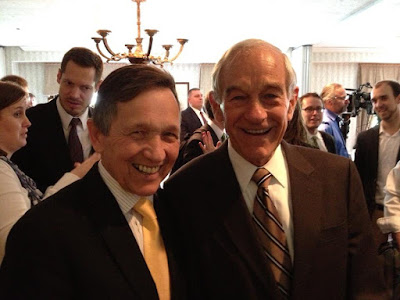 Former U.S. House members Dennis Kucinich and Ron Paul, who both favored peace and civil liberties. (Kucinich was my congressman when he held office.)

Over at Secret Transmissions, Jeff Wolfe has a new posting up on "An Omnidirectional Approach to Anti-Authoritarianism," which makes a variety of points I mostly agree with. He also quotes Robert Anton Wilson in several places. I particularly liked this quote from RAW:

"But I think government should be treated like religion, everyone should be able to pick the kind they like. Only it should be contractual not obligatory. I wouldn't mind paying tax money to a local association to maintain a police force, as long as we need one. But I hate like hell paying taxes to help the US government build more nuclear missiles to blow up more people I don't even know and don't think I'd hate them if I did know them." ― Robert Anton Wilson

My favorite part of the post was the explanations of "anarchism without adjectives" and "panarchism," terms that were unfamiliar to me.
on February 04, 2017