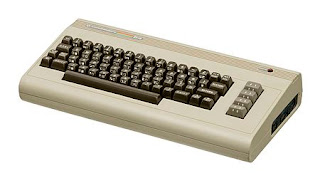 The Commodore 64, my first personal computer


I have sometimes wished that I had been born about 10 years later, so that I could have been a teenager during the 1980s, rather than the 1970s. It would have been interesting to be a teen during the early years of the PC and MTV, and I like 1980s New Wave pop music better than disco. It seems to me the main good thing about having to deal with eight track tapes and LPs when growing to love music in the 1970s is that I am old enough to appreciate the online/digital music revolution and how easy it has made it for me to have a huge collection of music at my fingerprints.

Which makes me wonder: Did RAW ever think he was born out of time? He loved modernist writers such as Joyce and Pound; did he ever wish he was a contemporary, or a least had followed more closely behind them? Although music technology would have been primitive, it seems to me he might have liked the musical culture better, too.

I think Bob loved living through the Sixties with elders like Leary, Bucky, and Burroughs. I suspect he might liked getting born later to experience new technology. And perhaps living forever along with us.

You might enjoy Barry Smolin's great books about growing up in the Seventies.

Born 1942; socially retarded, so I identify with the Baby Boomers. I’m a Horrible Example of Tim Leary’s idea that we love the music we heard when we were undergoing puberty. Maybe Fats Domino & the Drifters aren’t really the greatest ever, but I know what I like and what I don’t (90% of music from after 1970). Started out relatively sane about sex & race (which isn’t saying much) because my parents were but still scarred by the general repression and the need to rebel against it.

Timely topic for me. I recently bought a new needle & cartridge for my turntable & have been listening to some of my old records I loved back in the 70s--mostly Zappa & the Mothers Of Invention & they still sound good to me. I'm finding I missed the process of playing records taking them out of the sleeves, placing them on the turntable, etc. & being there to raise the tone arm off when the side is over. I find it forces me to be more present & actively participate the process of listening to music. I don't have good enough hearing to tell whether analog music has better sound quality than digital (which some are claiming) but I do like listening to my old records again...