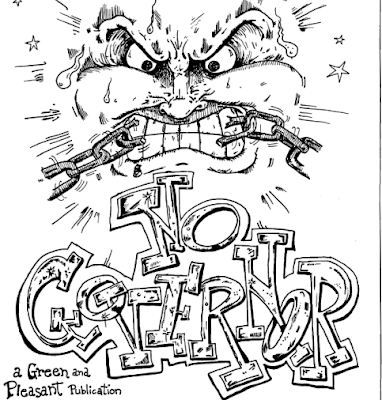 [Certain recent political events and actions associated with them have revived debate about freedom of speech on social media, so I thought I would let Robert Anton Wilson weigh in.

This is from a letter published in issue No. 10 Robert Shea's zine, "No Governor." The full letter is here.  Wilson is responding to a defense of environmental radicals by Neal Wilgus in issues No. 9 and 10. All of the  issues of "No Governor" are available as PDFs here.  I obtained them from the University of Michigan in the earlier days of the blog— The Management.]

That issue is from 1982 it looks like, so this is after Wilson wrote the introduction to "The Illuminoids" by Neal Wilgus then?

I've personally never felt RAW would be a comfortable fit in today's world of identity politics on the left and sheer lunacy on the right. I'm confident his writings will never catch on with the current social media generation since he is far too critical of groupthink and condemnation.

This is a wonderful point by RAW, and well worth remembering.

I think advocating the position of liberty and personal freedom is absolutely vital in these second circuit dominated, shit slinging times.