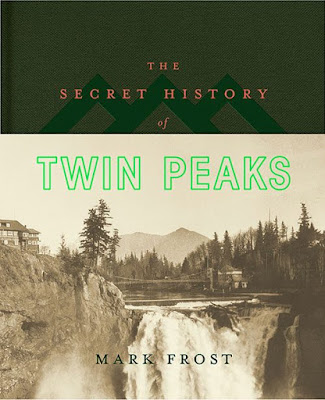 But many Wilson fans are fans of the show (I liked it, too), so I'm passing on this book review of The Secret History of Twin Peaks by Mark Frost (co-creator of the show along with David Lynch). The review says the book is a "must read" before starting on the revived new series next year, but is the paragraph in the review that surprised me:

The Secret History takes us down the rabbit hole of pretty much every 20th-century conspiracy theory and ties them to the happenings in the woods around Twin Peaks. It’s frankly astounding that this book can link the Freemasons, the Illuminati, Roswell, Project Blue Book, the Majestic 12, Aleister Crowley, Dianetics, the creation of the Jet Propulsion Laboratory, JFK, Tibet, Watergate and Jackie Gleason (yes, of Honeymooners fame) into the Twin Peaks universe in a way that works in the context of the show’s mythology.

Maybe Frost is a RAW fan, after all?

The book is out now in Kindle and hardcover, and I'm sure I will get to it eventually.

I think it might just be the widening knowledge of Jack Parsons and that whole story. Since being something that only people involved in occultism or ufology knew about it kinda skyrocketed to public knowledge with the two published biographies and the popular studies of Scientology. Almost disappointing but Parsons, the Agape Lodge, and the JPL have, in my understanding, became "Californian lore" as much as any stories about old Hollywood. Everything is mainstream today.

That said I did write a couple articles a few years back, before there was going to be another season, on the occult influences on Twin Peaks which focused a lot on the Theosophical/Talbot Mundy roots of the Lodge system etc.

I think Rarebit Fiend is probably right: the Parsons story is so amazing - and true - that the word has traveled far and wide. I know every time I've brought it up in book groups peoples' pupils dilate when I give a verbal precis of _Sex and Rockets_.

"Are you putting us on?"

"No! This stuff really happened. Check it out for yourself and get back to me."

The idea that JPL and NASA has something to do with Crowley and ceremonial (sex) magick, and pre-$cientology Hubbard and spying for Naval Intel, an exploding mansion on Orange Grove in Pasadena: seems too good to be true.

If I had to write the "backstory" of the Twin Peaks world I'd gravitate to Parsonian territory too. But Jackie Gleason? I'll have to check it out.

BTW: Whenever I want to read something possibly wild that I've never heard about, a tried-and-true method for me is to do a library catalog title key world search "Secret History" and see what comes up. Sometimes it's not all that secret or interesting or well-written (sometimes all three), but quite often I get the serendipitous hit.

I think you guys are probably right. There was also a well reviewed novel, "The House of Rumor" by Jake Arnott, that covered much of this. (I haven't gotten around to reading it yet, but it's on my Kindle.)

I did try asking Mark Frost (on Twitter) if he's a RAW fan but got no reply.

Jack Arnott is an amazing writer. "The House of Rumor" and the "The Long Firm" are both awesome reads.

Michael, I think one of my favorite pieces of Twin Peaks "lore", from the "Insider's Guide" which was contemporary to the original run, is that The Guess Who played Twin Peaks back in the early Seventies.