'Illuminati' to appear in 'Avengers' film 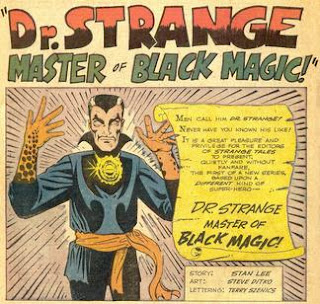 The debut of Dr. Strange back in 1963, art by Steve Ditko. Reproduced in the Wikipedia article under the doctrine of fair use.

The Illuminati, or at least the Marvel comics version of them, will appear in an upcoming "Avengers" film.

From Darkhorizons.com: "Marvel Studios president Kevin Feige has teased that Marvel’s take on the Illuminati are going to arrive in the upcoming 'Avengers: Infinity War' which begins production next month.

"Out doing press for 'Doctor Strange,' Feige confirmed to CBM that Illuminati characters will come together in the film but would mention names beyond confirming that Benedict Cumberbatch’s Doctor Strange is in the film. Both Strange and Tony Stark (Robert Downey Jr.) are key Illuminati members in the comics ....

"First debuting in 2005, The Illuminati was a secret society comprised of Doctor Strange, Iron Man, Namor, Mr. Fantastic, Professor Xavier and Black Bolt. Marvel Studios doesn’t control the rights to most of these characters any more though so Doctor Strange and Iron Man coming together could be it."

More here.  My son his my comics expert, so I'll have to ask him about this stuff. All of this "Illuminati" stuff in popular culture can't be bad for the RAW estate.

I look forward to the next Avengers movie. I loved "The Infinity Gauntlet" comics by Jim Starlin in the 90's.

Eric--I'm sure a lot of Starlin fans picked up the original edition of Cosmic Trigger "just because!"