Robin Hanson thinks for himself 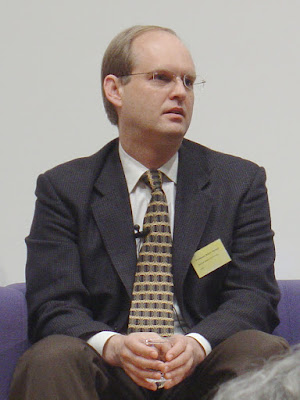 Although I often read blog posts written by the likes of Tyler Cowen, Alex Tabarrok and Bryan Caplan, all libertarian-leaning professors at George Mason University, I have not paid much attention to Robin Hanson.

John Merritt, however, wrote to me to call my attention to an article in The Chronicle of Higher Education, "Is This Economist Too Far Ahead of His Time?" John remarked that Hanson "has some RAW riffs."

Certainly any Robert Anton Wilson fan, particularly ones who have just finished reading or re-reading Cosmic Trigger, will pick up on this bit:

Like much of the George Mason economics department, Hanson leans libertarian, but he has also dreamed up his own form of government, called "futarchy." An enthusiastic student describes his true political philosophy as "meta, meta-everything": questioning how we arrive at political philosophies in the first place. To the dismay of his wife, Peggy Jackson, who has worked in hospice care, he is a member of the Alcor Life Extension Foundation, paying a monthly fee so that one day his head will be cryogenically frozen. He thinks he may live a long, long time — if not forever, then possibly at least long enough to participate in the em future.

Dr.  Hanson has a blog, Overcoming Bias.  You can read  his reaction to the Chronicle piece, ("Honestly, 'baffled' is how most undergrads look to most professors during lectures."), his discussion of the case for a world basic income (another point of interest for RAW fans). You can read about his proposal for Futarchy.

It seems to me that if we make up a category, libertarian futurists, people who are optimistic about the future of freedom and technology, we could include Robert Anton Wilson, Timothy Leary, Peter Thiel and Robin Hanson.

Google "transhuman/transhumanist" to discover many more visionary libertarian futurists, some of whom were the thinkers and writers who originated ideas that Leary and RAW later appropriated.