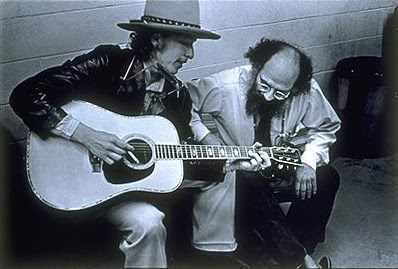 Robert Anton Wilson didn't like Bob Dylan, but he did like the guy with Dylan, Allen Ginsberg. Creative Commons photo by Elsa Dorfman.

By  now, you've probably heard of Bob Dylan's Nobel Prize for Literature. I was delighted by the news and ran to tell my wife early Thursday morning as soon as I heard the news. I was stunned someone I actually liked would win. In  typically perverse fashion, the "News" section of the official site has nothing about the award, not even the customary press statement from the artist that anyone else would have issued by now.

Robert Anton Wilson wasn't a Bob Dylan fan, or at least he wasn't back in 1976, when he gave a long interview to New Libertarian Notes.  The interview starts out with a few questions about RAW's favorite writers, musicians, etc.,  and includes this exchange:


CRNLA: What do you think of M*A*S*H, the Freak Brothers, Bob Dylan?

RAW: I loved Altman's film of M*A*S*H but I can't stand the TV series. The Freak Brothers are funny, but I deplore the lifestyle it celebrates. Of course, Einstein and Michelangelo were sloppy, too, but only because they were too busy with real work to fix their attention on sartorial status games. Hippies generally aren't busy with anything except feeling sorry for themselves. Dylan seems to me a totally pernicious influence -- the nasal whine of death and masochism. Certainly, this would be a more cheerful world if there were no Dylan records in it. But Dylan and his audience mirror each other, and deserve each other; as Marx said, a morbid society creates its own morbid grave-diggers.

Wilson apparently got his dislike of Dylan from Timothy Leary, from the days when Leary was trying to get the Man off his back by writing for National Review. More here. Leary changed his mind; I don't know about Wilson.

I sincerely doubt that Bob 'got his dislike for Dylan' from anyone other than himself. It wasn't his way. Although I am a touch surprised by his strong opinion on the matter. For someone who loved Joyce as much as he did, it boggles a bit. Bob also mentioned, on numerous occasions, that he didn't always agree with himself from day to day, so it is possible that he softened on the matter.

I'd wager that Leary got the gig at the National Review because he was scoring weed for William F. Buckley, Jr.

Like most of us, Bob could really get it wrong sometimes, particularly most things having to do with popular culture. His take on hippies and Dylan is based on his own limited experience with both, and might be a factor in his inability to ever reach a larger, more sustainable audience. Tim on the other hand was always interested in what young people were up to, and except for the period when the g-men were literally making him crazy he maintained good relations with a goodly number of the most interesting "hip" musicians, artists, filmmakers, etc.

What did Bob think of Bruce Springsteen?