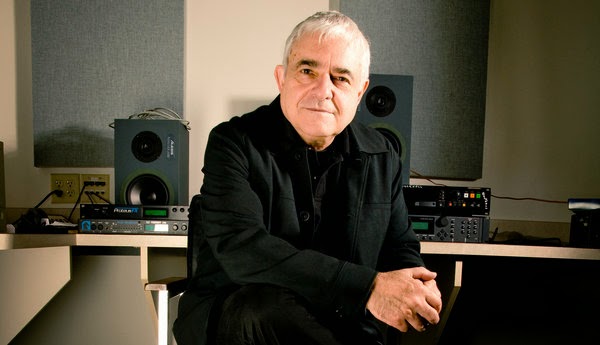 American composer William Duckworth (1943-2012), who never inserted musical notation into bacteria and probably is not alluded to in the new Richard Powers novel.


I recently had a unique reading experience. I read a new novel, Orfeo by Richard Powers, and as I went though it, I had the odd feeling that it was written for me. It’s an interesting experience  of synchronicity,  and as RAW fans are interested in synchronicity, I write about it here.


I'm not crazy enough to think that when famed novelist Richard Powers sat down to write his new novel  that he was aiming for a book that would please his longtime fan, Tom Jackson, out in Ohio. But there are interesting coincidences that gave me an eerie feeling.


Start with the fact that only a fairly narrow audience of readers will get many of the references. Orfeo is a literary novel about a modern composer, Peter Els,  that contains a great many allusions to music. People who listen to modern classical music are a small subset of a relatively small group of listeners.


The words quoted at the top of my blog post, for example, are from an aria that Richard Nixon sings from the John Adams opera, "Nixon in China," about Nixon's historic trip. I recognized the words when one of Adams' characters, a character somewhat reminiscent of director Robert Wilson, sang them words to Els.


A cassette tape of "Nixon in China" was one of the first recordings of modern classical music I ever bought. Although it is famous as modern operas go, I would be surprised if as many as 1 in 100 Americans would get the reference without help. Powers inserts the words I’ve quoted into his novel without explanation. There’s also a joke about spectral music, which you’ll get if you recognize the name “Tristan Murail.”
Powers is that kind of novelist. He never explains in the text, either, why he calls the book Orfeo. And that gets us into why I had the odd feeling the book was written for me.


One of my hobbies, aside from letting a blog about Robert Anton Wilson eat up much of my time and attention, is listening to classical music. Aside from the usual suspects every other classical listener pays attention to, I have a particular interest in modern classical music, including some composers who are considered too “way out” for most people.


One of my favorite composers is William Duckworth, who died of cancer a couple of years ago. I own all three available commercial recordings of “The Time Curve Preludes,” his best-known work. It's a great piece. I own most of his other work that is available on the market. I even knew Duckworth,  in the sense of “knowing” someone you’ve only met on the Internet. I blogged about him, and he sent me an autographed copy of one of his books. Another time, he sent me an unreleased CD of music by his world music/avante garde band. Once he wrote to suggest a blog post, and so on. I was quite upset when he died. His New York Times obit is here.


But the clincher in the possible connection of the two is the word Orfeo.


Orteo is Italian for Orpheus, the character in Greek mythology whose music was so powerful he could charm all living things and even rocks with his music. When Els gets into trouble with the federal government for breeding bacteria in his apartment (in a concept that even Duckworth never thought of, Els wants to insert musical notation into the DNA of bacteria, so his music will last for millennia) he goes on a journey, analogous to Orpheus' famous descent into the underground, to recover his own lost loves.


But Orfeo also has a specific meaning for classical music buffs. The opera L’Orfeo  by Monteverdi is one of the earlier operas, and is certainly the first opera still remembered and performed today.


Duckworth also composed a version of the Orpheus story. As Wikipedia explains, “The iPod Opera 2.0: The Myth of Orpheus, the Chronicler and Eurydice, [was] podcast in 26 episodes as MP3 and QuickTime video files. The video episodes may be downloaded and played on many different kinds of computer systems, including Apple OS, Windows and Linux computers, while the MP3 files may be downloaded and burned as an audio disk. The completion of the podcast in February 2007 was timed to coincide with the 400th anniversary of the first performance of Monteverdi's L'Orfeo.” I’ll add that the first number of the Duckworth piece is a rewrite of the overture to Monteverdi’s opera.


The Powers novel has Tweets from Els interspersed throughout the text. Duckworth was active on Twitter, as @Timecurve.


My wife says that a smart guy like Richard Powers probably knows who Duckworth is. My own guess is that I’m outlining coincidences here, and the novel is not, in fact, a long dog whistle to William Duckworth fans.