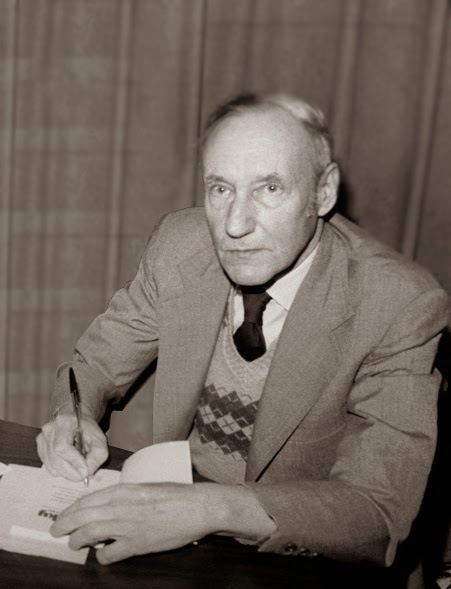 This section of the book has very sudden shifts from one passage to another, so perhaps we should talk about where that comes from.

Artist and writer Brion Gysin is credited with coming up with the cut-up technique for remixing prose. Here is a bit of an interview with writer William S. Burroughs, from the Wikipedia article about Gysin.  Burroughs popularized the technique in his own writings.

INTERVIEWER: How did you become interested in the cut-up technique?

BURROUGHS: A friend, Brion Gysin, an American poet and painter, who has lived in Europe for thirty years, was, as far as I know, the first to create cut-ups. His cut-up poem, Minutes to Go, was broadcast by the BBC and later published in a pamphlet. I was in Paris in the summer of 1960; this was after the publication there of Naked Lunch. I became interested in the possibilities of this technique, and I began experimenting myself. Of course, when you think of it, The Waste Land was the first great cut-up collage, and Tristan Tzara had done a bit along the same lines. Dos Passos used the same idea in 'The Camera Eye' sequences in USA. I felt I had been working toward the same goal; thus it was a major revelation to me when I actually saw it being done.

Robert Anton Wilson, a big admirer of Burroughs' prose, adapted the technique for his own writings, sometimes to an extreme, for example in the piece, "No Waters in the Cherry Valley by the Testicles" in the book Coincidance: A Head Test.

Burroughs and Wilson both note that an early use of a kind of cut-up technique was made by Dadaist poet Tristan Tzara, who came up with the idea of clipping words out of a newspaper, putting them in a hat, shaking the hat and then pulling out the words to string them together into a poem. (When I was in high school, I read about this in a magazine article about surrealism and experimented with it myself.)

Wilson writes (in Coincidance): "The bourgeosie world naturally regarded this as some morbid joke, or satire, and forgot it; but the surrealists realized the importance of what he had done."

"Painters explored collage extensively in the 40 years after Tzara's breakthrough, and every motion picture director conducted extensive research in montage, but prose and poetry, with few exceptions (Joyce, Pound, Williams) moved backward like a crab and crawled into the Victorian or pre-Einsteinian murk. The second quantum leap occurred in the late 1950s when William S. Burroughs began experimenting with the cut-up and fold-in techniques and created a prose of incredible accidental beauty and Zen humor.

"I have used various cut-up and other stochastic techniques in all my novels and have noticed one amusing thing about the response to this: hostility is expressed most widely if I admit that I am using "mechanical" techniques of the Burroughs and Tzara variety. If I do not publicize this fact, there is less hostility. It appears that lazy readers are only terrified of the new if they are warned in advance that it actually is novel and experimental. Otherwise they just pass over it as a confusing passage and forget it. I am not interested in lazy readers, however, but in the attentive and awake."

"These is a road ..." Page 92. New Lebanon and Brookville actually are west of Dayton. Yellow Springs, where RAW lived and Simon Moon went to school, is east of Dayton.

Miskatonic University  Page 94— Featured in the works of H.P. Lovecraft. A friend of mine in college, Richard Newsome, wore an authentic-looking Miskotonic University college sweatshirt, purchased at a science fiction convention. One of his professors was puzzled that he had never heard of the school. Richard explained that it's a small liberal arts school in Massachusetts.

Tom Dewey  Page 98 — Thomas Dewey was a Manhattan District attorney known for prosecuting mobsters. Later, the governor of New York and the Republican nominee for president.

I had stopped listening to new music by the time Illuminatus! came out. To what extent does Kraftwerk resemble the American Medical Association?

One major source for Wilson and Shea's "very sudden shifts from one passage to another" seems Ezra Pound who eliminated transitional passages from his writing. Pound also encouraged T. S. Eliot to eliminate transitional passages from "The Waste Land." Bob Wilson saw parallels between Pound's practice and the use of montage and sudden transitions in D. W. Griffith's films, especially the intercut four story format of "Intolerance" which served as a template for Illuminatus!

The AMA has often made me think of Kraftwerk, the only German band from the 70's I know of in my ignorance. I find it interesting that my friends and I hated Kraftwerk in the 70's, but they have had a major influence on the evolution of techno music.

Pg. 94 mentions the city of Irem - http://en.wikipedia.org/wiki/Iram_of_the_Pillars . I love how Wilson and Shea have a real Lovecraftian tone in this passage.

Pg. 99 mentions Babylon and Ishtar. One of the stories in "Intolerance" takes place in Babylon. A mall in Hollywood has decorations in imitation of the Temple of Ishtar in that film.

I came late to the last few weeks (read: yesterday) so I'm gonna jump on this section today.

@Tom, that's funny about your college buddy's sweatshirt! I wonder if the professor ever looked up Miskatonic U...

On Lovecraft, Miskatonic is located in "Arkham," Massachusetts, as mentioned on page 94. This fictional city has been co-opted by DC Comics, and appeared in recent pop culture through Nolan's Batman trilogy--the Scarecrow was an Arkham Asylum psychiatrist (experimenting on inmates) before his arrest and incarceration.

Page 93, "...summoned help by giving the Masonic signal of distress. Do you know what that is?" Answered in Appendix Mem, page 797.

Page 97, the Bavarian Illuminati Conspiracy chart, the Sphere of Chaos is overseen by Mordecai the Foul (Malignatus), aka RAW.

Page 100, "The JAMs can't do it alone." They need your help! Go listen to The KLF for further instruction.

Page 102, "But--Tim Leary an Illuminatus?" No. But maybe an Illuminoid... The "Illuminates of Thanateros" claim Leary and RAW (and Burroughs) as members. I don't know how credible that is.

Burroughs also inspired the Hassan I Sabbah references and probably Dutch Schultz too from WSB's play "The Last Words of Dutch Schultz."

Doris Horus (p. 94) has one of my favorite names of the characters in Illuminatus! We have entered chapter "Binah" "Door" = one name for the path on the Tree of Life that connects Chokmah to Binah, or the last chapter to this one. This path, Daleth, also corresponds with Venus the Goddess of Love. After Doris Horus enters the scene the writing goes into the H.P. Lovecraft mythos.

p.94 also name checks The Book of the Sacred Magic of Abra-Melin the Mage, an important book for Aleister Crowley as it introduced him to the ritual for The Knowledge and Conversation of the Holy Guardian Angel which became an important part of his system. That might be a fancy/archaic way of saying getting in touch with your True Self or learning to communicate with the higher brain circuits.

p. 99 "Rebecca Goodman closes her book wearily and stares into space..." - up until sex goddess Ishtar?" strongly suggests Binah. The narrative then cuts to our squirrel friend Perri hunting for food in Central Park. "... he runs three times around a tree." 3 = the key number for Binah.

It seems the AMA band got modeled after Kraftwerk, or it appears a great coincidence of wordplay - they "had replaced H.P. Lovecraft in the back room." (p.100) Kraftwerk replaced Lovecraft.

The AMA band consisting of 4 kids from Germany also reminds me of both The Beatles and Wilhelm Reich. The real AMA persecuted the German Reich for his ideas, one of the main ones being Orgone - the force of sexual energy. 4 = Daleth = Venus. The Beatles sang a popular song on the subject at the first ever satellite broadcast around the world.

Does anyone know whatever happened to Neal Wilgus?

p.100, "they're nuttier than the SSS..."
SSS: Satanists, Surrealists, and Sadists (as identified later in the text).


@ Daddy Eroshka, p.102, "Tim Leary an Illumminatus?"
While I cannot substantiate the IOT's assertion that Leary and Burroughs were members (or that Burroughs was buried with his IOT ring on, as they also claim), RAW's Introduction to the Loompanics Unlimited printing of the 4th edition Principia Discordia is somewhat relevant... almost. He states: "Increasingly, people wrote to ask me if Timothy Leary had written it [the PD], and I almost always told them he had, except on Fridays [...]"

Most of the information's are related my blog
forevart

Nice Post and all information's are used to everybody
PortugueseSayings

Its very useful if every one should follow this
pgchic

Some articles are related in our life,so nice
pssdcng

Keep posting this articles and useful for every one
anappleadaydiner

Some articles are related in our life,so nice
guygarrud

Keep posting this articles and useful for every one
arbresremarquables

Some articles are related in our life,so nice
bastardsproduction

Keep posting this articles and useful for every one
cheesebonk

The information's are useful for all the people
computerworkstationsforless

Keep posting this articles and useful for every one
schlosshandel24

Some articles are related in our life,so nice
thefintrail

Peoples are giving the wonderful thoughts for all comments
BbWineFest

The words are so simple and easy to understand
deepcool-it