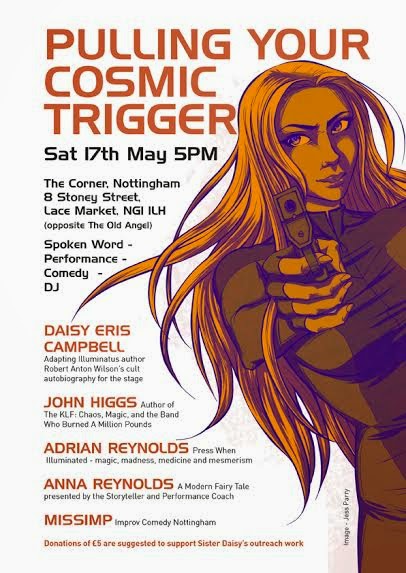 One of our English correspondents, Adrian Reynolds, writes to tell me about the gala "Pulling Your Cosmic Trigger" event scheduled for 5 p.m. Saturday, May 17, in Nottingham. See above. Donations are being accepted to aid "Sister Daisy's outreach work," e.g. her upcoming dramatic production of RAW's Cosmic Trigger.

The all-star show will feature Daisy Eris Campbell, author John Higgs, Adrian Reynolds, storyteller and performance coach Anna Reynolds and Nottingham improv comedy outfit Missimp. (I had guessed that the Reynoldses were a couple. In one of those coincidences that RAW enjoyed, Mr. Reynolds in fact has never met Ms. Reynolds, except online. Be sure to check out Anna's bio at the link. "My earliest memory is bouncing up and down in a cot in hospital, vomiting, then bouncing some more. And motivating the other kids around me to bounce.")

Adrian Reynolds is a scriptwriter and  a coach for other creative folks. "Recent projects include Making Sparks, a supernatural thriller serial about to launch as an app.

"White Lily, a short film about love, memory, and comets.

"Coming up are two collaborations with an Emmy-nominated American filmmaker."

I asked Adrian a few questions:

Can you tell me a little bit about this event, and what you will be talking about in your talk?

The event is a celebration of Robert Anton Wilson in various forms, from Daisy Eris Campbell discussing the impact of his work in her life and which has taken her to staging Cosmic Trigger later in the year, through to a comedy impro group who are familiar with Illuminatus and have who knows what in store for us.

I'll be discussing a variety of incidents connected by being off the map that mainstream media encourages, from experiences of what seems to be telepathy to adventures in the mental health system, and how they might be connected with what is considered acceptable or verboten within medical and scientific discourse as it's popularly — and poorly — presented. It's not anti-scientific, just looking to present those fields as what they are — human endeavours as flawed and politicised as any other.

Did you put this together to support Daisy's efforts?

Very much so. I was massively inspired by the Liverpool show that Daisy put together in February, and wanted to offer a sequel of sorts in Nottingham, where I've lived for a long time. And I was aided in this by the wonderful Robert Howie Smith, who does an amazing job turning underused buildings in the city over to community and creative groups, and who had started on that path partly through arranging a cinema and theatre space for Ken and Daisy Campbell in London some years ago.

I was also very taken with John Higgs, more so since when I was reading his KLF book on a tram, I'd just finished the Dr Who section and looked up from the page to see a vehicle with TARDIS written on it as I approached my stop. Clearly, John's mojo is working.

The idea for the show was hatched outside what will be the venue for Pulling Your Cosmic Trigger, where I ran into Rob who was more than keen to do something. And as I wandered away I realised I'd be doing my first spoken word performance as part of it. Clearly, we were in the right place and time for the right thing to occur.


Anyway, the event will be happening a week before Daisy's Kickstarter goes live, and the funds raised will go towards that, minus money spent on printing flyers and keeping us suitably caffeinated on the day.

Did you have to get a permit from the sheriff of Nottingham to put this event on? Is Sherwood Forest nearby?

The Sheriff isn't the force he once was in town. Other areas of the country are starting to lay claim to Robin Hood for reasons not unrelated to tourism, and he doesn't seem to have done much about that, which is pretty poor given their mutual antagonism: you'd think he'd be against a proliferation of Robins.


Sherwood Forest isn't too far away, and at this point in time is the only one of that name. A few years ago, I was in town with friends and offered a job as Little John by a man dressed as Friar Tuck, but I had other plans. I still wonder what would have happened if I'd taken him up on it, but I'm very glad that the path I'm on has taken me to bringing Pulling Your Cosmic Trigger to Nottingham.