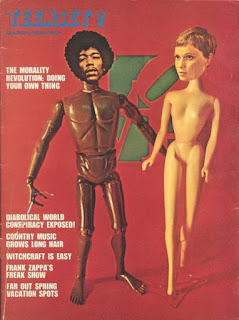 Here is the cover for the March 1969 issue of "Teenset" magazine. I went out and found the graphic after reading Michael Johnson's comment on yesterday's post: "Supposedly Shea wrote an actual article to Teenset magazine in 1969, under the name 'Sandra Glass.' If true, part of it is in Illuminatus!, pp.40-41, and note that 'Sandra' is getting her info from 'Simon,' who would be RAW.

"This Memo was dug up by 'Pat' the researcher, who's throwing Saul a lot of curves, knucklers...Something ain't right about this gal."

As you can see, the cover of "Teenset" mentions an article, "Diabolical World Conspiracy Exposed!" An ad on eBay for an issue of the magazine (alas, it had been sold) states that the article was about the Illuminati. I'd love to get my hands on an actual issue of the magazine, but apparently there really was such an article. I am pleased to be able to vindicate Pat, at least partially.

Just did a little research...Apparently the issue in question was the final issue of TeenSet under that title (hence the question mark in the title). As of the following issue the magazine changed its name to AUM.

Good work, Tom. Wow: a doll with Hendrix's head on it, and it looks like Mia Farrow is the girl doll, so who knows how much this issue of Teenset is involved in the Manson killings.

I'd love to read that entire issue cover-to-cover. Did RAW and Shea get word from inside the magazine editor's world that this Teenset was going under, and they pounced on it and made it into a WTF? for "teens"?

Getting teens interested in the worldwide Illuminati conspiracy? Talk about corrupting the youth of America! Simon's line to Sandra: it all started with Hassan i Sabbah and mindcontrol involving hashish!

I love the High Melodrama for teens in a sentence like this by Sandra Glass/Robert Shea: "Cornered in their mountain hideaway, the Hashishim dope fiends proved no match for the clean-living Mongol warriors, their fortress was destroyed, and their dancing girls shipped to Mongolia for rehabilitation."

Then quickly, it's onto Bavaria, Weishaupt, Beethoven and Goethe. Did you know that "Beethoven tacked up an _Ewige Blumenkraft_ poster on the top of the piano in which he composed all his symphonies."? I didn't even know they HAD posters in the early 19th! Oh MY GAWD, it's all come full circle! It's happening again!

Jeez, the more I look at the cover of that magazine, the more mesmerized and covetous I feel...and I have a strong desire for find out how country music grows long hair.

This reminds me of RAW's time as the writer/editor/everything of a bunch of tabloids, and how he dreamed up an article with the title, IIRC, "Hunchback's Hunch Goes Missing/Woman Poisoned By Hunchburger."

I remember reading the article by "A. Nonymous Hack" when it first came out, with that great description of the primitive times of the early 60s: "You let *pubic hair* get in!!! We could all go to jail!!!" I was already a RAW fan from his other Realist articles, but I didn't know it was him until he told one of the other stories in it in Book of the Breast.

Bob and Bob are not the only authors referencing this issue of teenset magazine: http://books.google.com/books?id=7Y6OAAAAQBAJ&pg=PT66&lpg=PT66&dq=teenset+magazine+sandra+glass&source=bl&ots=HPP75PimQQ&sig=BFS1lr4vIiSqqVObjgT67mJYpHo&hl=en&sa=X&ei=dp6oUtfnJqugsQTmwoDgCQ&ved=0CC4Q6AEwAg

for beginners like me need a lot of reading and searching for information on various blogs. and articles that you share a very nice and inspires me .
cara menggugurkan kandungan
obat aborsi
kalkulator kehamilan