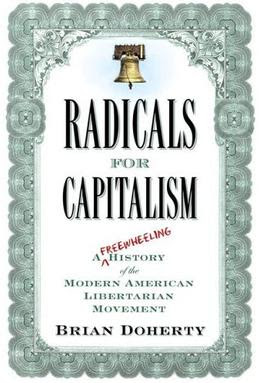 As we are about to begin (on Nov. 28) a book group on the Hilaritas Press book Natural Law Or Don’t Put A Rubber On Your Willy And Other Writings From A Natural Outlaw, written by Robert Anton Wilson and edited by Chad Nelson, I thought a bit of background on RAW's relationship with libertarianism might be useful. While I maintain that Natural Law is not really a "libertarian book," in the title essay RAW squares off against other prominent libertarians in an essay originally published in a libertarian journal.

Radicals for Capitalism by Brian Doherty, published in 2007, is a history of the libertarian movement, more than 700 pages long, and it includes about four pages of discussion about Robert Anton Wilson.

Doherty says that RAW is "one of the last of the pure Benjamin Tuckerites" and explains that Wilson "love liberty but held fast to Tuckerite ideas that modern corporate capitalism and banking just weren't any kind of liberty he valued."

Illuminatus! is described as "the most powerful and widely read libertarian artistic statement of the past thirty years," while also noting that "Wilson's work appeals on so many levels that one can become a Wilson Head without reaching his libertarianism. Through Wilson's influence one might become an Aleister Crowleyan, a Wilhelm Reichian, an old-fashioned Tuckerite, a techno-future-optimist in the manner of Buckminster Fuller or Timothy Leary."

Doherty's book also has a brief discussion of Discordianism and Kerry Thornley. Although it is obviously a bit out of date at this point, it is an interesting discussion of the history of libertarianism for those who might be interested. Doherty covers more recent developments in the movement for Reason magazine.

Email ThisBlogThis!Share to TwitterShare to FacebookShare to Pinterest
Labels: Brian Doherty, Natural Law Or Don’t Put A Rubber On Your Willy And Other Writings From A Natural Outlaw, Radicals for Caplitalism

Great post. although it’s long been on my wishlist, I’ve never read Radicals and didn’t know it contained this wonderful raw material. That’s a powerful statement about illuminatus.

I came across the below-linked David Friedman blog post last week on left-libertarianism. It’s not possible to fully grasp the nuances of LL in a single blog post, but I still appreciate several parts of it. Namely, the claim that what most people today would consider libertarianism is a far cry from its original meaning. I also like Friedman’s five (often overlapping) categories of left-libertarians. RAW almost certainly fits into at least 2 of them. Too often, critics dismiss left-libertarians as something like social progressives who are confused about libertarian philosophy, and simply want to smuggle social issues into their flawed notion of it.

The book Friedman critiques, Markets Not Capitalism, is an all time favorite of mine. It dismantles the need for and legitimacy of hierarchies in all their forms. I’ve always imagined RAW would have appreciated it. I must admit though, Friedman’s criticism of MNC’s Walmart article seems strong to me.

How much brain damage does one need to occur before they value the "liberty" of corporate capitalism?