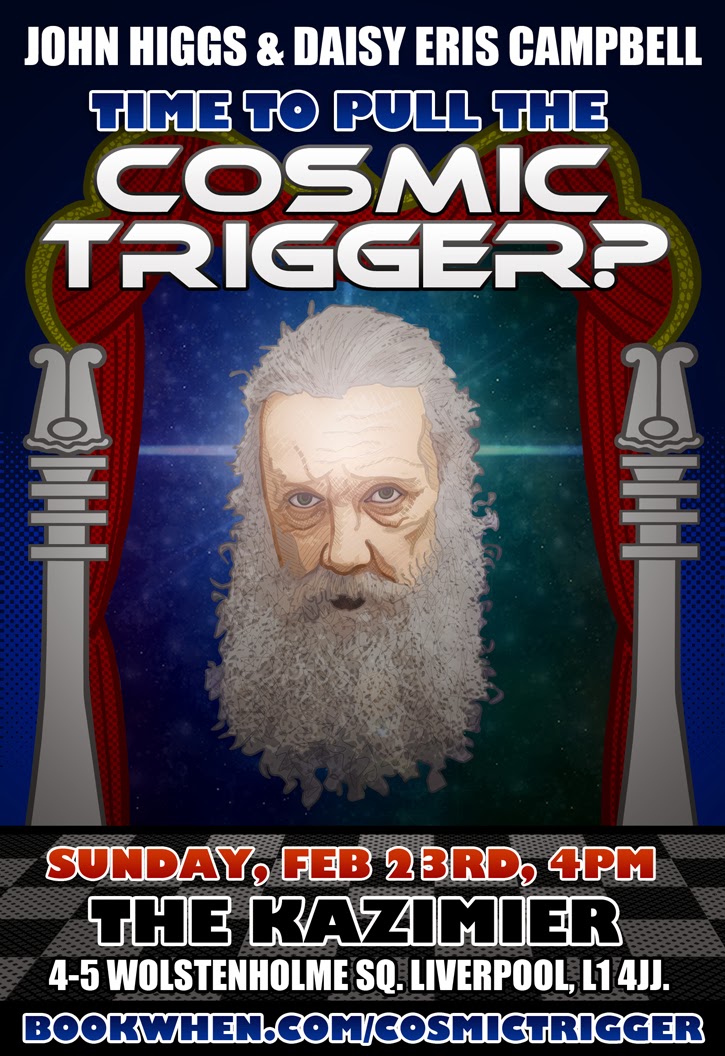 I had never heard of British author John Higgs until about a couple of years ago, but he has quickly become one of my favorite writers. Author of the excellent KLF: Chaos Magic Music Money, which all Robert Anton Wilson fans will want to read,  a Timothy Leary biography and two fine works of fiction featuring the mysterious reoccurring character Orlando Monk, The Brandy of the Damned and First Church on the Moon,  John came to the attention of many RAW fans in the U.S. with his witty Illuminatus! vs. Atlas Shrugged blog posting, although back in 2009 he had placed a piece on RAW in the Guardian.  And as you can see from the excellent Bobby Campbell poster for this month's Liverpool event, he's worked hard to help Daisy Eris Campbell stage Cosmic Trigger.

Unfortunately, I've run out of John Higgs books to read, so I got in touch with Mr. Higgs to verify that he's hard at work repairing that lack. I'm a little nervous about the "exclusive" part in the headline, as John is actually very nice and talks to lots of people. Perhaps in the interest of accuracy, the headline should say, "Exclusive: The only place you'll see John Higgs asked if he vacations on a Welsh island because he's a Druid." Or if I needed a zippier headline, I could write, "John Higgs: No, I'm not calling my book 'Headfuck Century' after all." -- The Mgt.

Is the Liverpool event going to be taped and shown on the Internet for the benefit of folks who couldn't be there, as the Horse Hospital event was?

Higgs: I hope so - if it is filmed (which is all Daisy's department) I imagine she would put it online once the indiegogo campaign starts (on April 23rd). Certainly the footage of Alan Moore talking RAW, which I'll be showing some of in Liverpool, will appear about then. 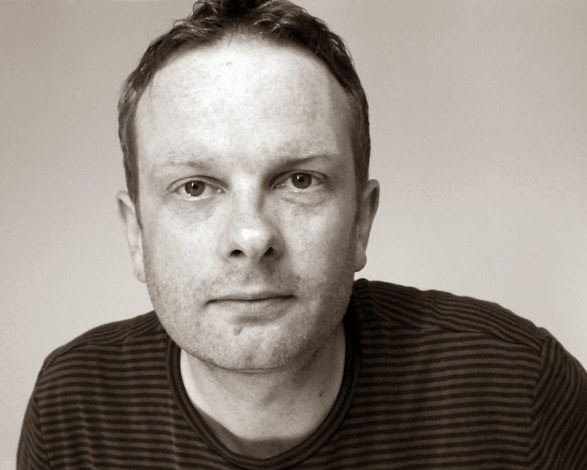 When do we get to meet up with Orlando Monk again?

Higgs: You never can tell with Orlando Monk, that's what I'm finding out. The next story about him - Phwoar and Peace - is written. Well, I say it's written, it's more accurate to say that it's memorised. Phwaor and Peace is the title I've given to the missing notebook pages mentioned in Brandy of the Damned and First Church on the Moon, which tell the story of why Orlando Monk was created and what he exists to do - for he has a very definite purpose, even if it is one that he seems very keen to avoid.

Phwoar and Peace hasn't been written down for two reasons. First, doing talks has got me interested in the old skill of oral storytelling. I will tell that story one day, but the Orlando Monk saga is something of a long game and that won't be for a while. Secondly, if I was to type the story and perform my usual backup, we now know that that story would be scanned by GCHQ or the NSA as a matter of course. It pleases me to think that nobody knows what he is avoiding doing, not even corporate or government software bots. That will make it much more impressive if he ever pulls off whatever it is that he is currently failing to pull off.

In terms of when he'll appear in one of my published works next, that will be in a novel called Take Off Your Skin And Dance Around In Your Bones, but that's probably about 18 months away. Although other people seem to be starting using him for various things, which they are of course more than welcome to do as he has put himself in the public domain.

How is that alternative history of the 20th century coming along?

Higgs: It is sitting next to me on my desk as I write. Its currently at second draft stage, and being read by a few alpha-readers who can be relied on to give me honest and interesting perspectives (Alan Moore being one of them, as was Steve Moore who I managed to meet by the old trusted method of naming a fictional moonbase after him, then sitting back and waiting). The working title is The Overview Effect: What We Discovered In The Twentieth Century. (I have finally conceded that it's previous working title, Headfuck Century, was a little unwise). I am very proud of it, I have to say, it feels like a real achievement. Certainly anyone who enjoyed The KLF book should get a real buzz from it.

It'll be a while before its out, and then it will be a hardback first - such are the ways of traditional publishing. It'll be worth the wait though.

Before then there will be a short, cheap ebook I'm doing for Random House in Canada about the subject of monarchy, in which I offer up a new perspective on monarchy which will get me beaten up by both republicans and monarchists alike. So well worth doing. That will be out late June, I think.

Does your family and Daisy's family vacation on Anglesey because it was a big center for druids? Or is is just a nice island?

Higgs: Actually I haven't been on Anglesey for over twenty years, but I do go to Snowdonia which is on the Welsh mainland and overlooks the island of Anglesey. Daisy goes there as she has family links that go back many generations, I love that part of the world, it is beyond epic and the fact that Anglesey (or Ynys Mon, to give it its old name, the mother of Wales) was the Druid heartland and their last stand against the aneristic Roman army makes total sense when you visit. What's not to love about an island that includes a place called Llanfairpwllgwyngyllgogerychwyrndrobwllllantysiliogogogoch? The book I intend to write next (before the next Orlando Monk novel) will end up there, so I should be visiting it soon.

I didn't even know you were Welsh until recently. I'm so jealous.

Higgs: I was actually born in Rugby in England but moved to Wales when I was three - so I'm an Englishman who thinks like a Welshman.