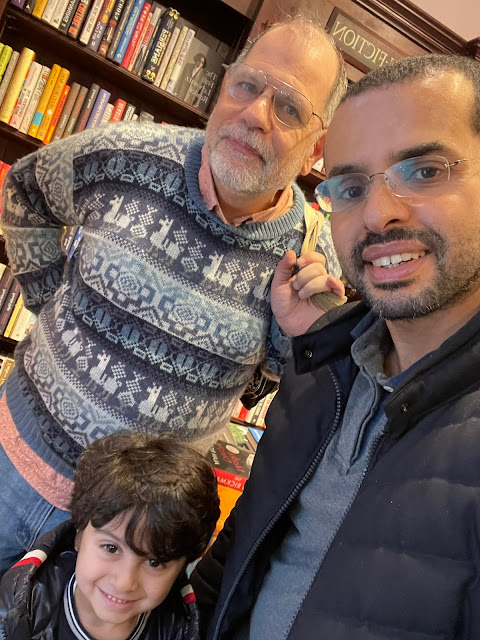 Tyler Cowen (the older guy) meets a fan recently in a London bookshop. "Serendipity is when you meet favorite intellectual at your favorite bookstore." Source.

It's always interesting to see the interaction of your favorite writers. Years ago, while I was at a science fiction convention, I attended a panel discussion on politics in science fiction. The panel included two writers I really liked, George Alec Effinger and Kim Stanley Robinson, and I watched as the two apparently introduced themselves to each other before the panel started.

Two of my favorite contemporary authors are John Higgs and Tyler Cowen; Cowen is perhaps best known for his Marginal Revolution blog, but I own some of his books, and I have nearly all of Higgs' books.

So I was pleased when Cowen (a big Beatles fan and fan of Paul McCartney in particularly) suddenly reviewed Higgs' new book, Love and Let Die, and became a Higgs fan in a big way:

I loved this book, and reading it induced me to order the author’s other books, the ultimate compliment.  It is not for everyone, nor is it easy to describe, but imagine the stories of The Beatles and James Bond films told as “parallel careers.”  After all, “Love Me Do” and Dr. No were released on the same day in 1962.

It is striking that they have been making James Bond films for sixty years now, and every single one of them has made money.  We are still talking about the Beatles too.  Will anything from current Britain have such staying power?

More than 100 comments to Tyler's blog post so far. I wondered what Tyler might think of the KLF book, and some of Higgs' fans in the comments make the same point. Could Tyler finally discover Robert Anton Wilson? And what will Tyler make of the Timothy Leary bio?

Tyler also has a podcast and has mentioned he hasn't been able to get Paul McCartney booked for it yet.