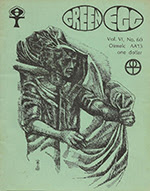 Many of Robert Anton Wilson's most pungent thoughts came not from books, or articles, or interviews, but from letters he wrote to various publications.

Martin Wagner has performed a useful service by gathering together thirteen letters RAW wrote to Green Egg. (Some of the texts have appeared on this blog, some at the Robert Anton Wilson Fans website, but some are available only because of Martin's efforts). Read a few of the letters and you'll see what I mean. This is good stuff, as alive as your current favorite Substack newsletter. Good for you, Martin.

Probably a good book could be compiled from RAW's letters.