The literature of cult and conspiracy 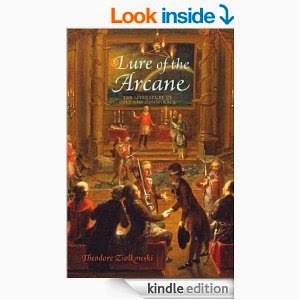 There's a new book out called Lure of the Arcane: The Literature of Cult and Conspiracy by Theodore Ziolkowski. He's a professor emeritus of German and Comparative Literature at Princeton University, and the book mentions the Illuminatus! Trilogy (including its alleged structural weaknesses, according to the book's index.)

The Times Literary Supplement review by Oliver Harris is here. Here's what he says about Illuminatus!:

An interim tradition, between the Protocols and Dan Brown, redeems the pleasures of the arcane with irony. The LSD-tinged meeting of metafiction and meta-conspiracy seen in the 1960s is, in part, a response to the dark side of straight conspiracy reflected in the Protocols. Its self-conscious mischief-making achieves literary credibility in Thomas Pynchon’s The Crying of Lot 49 (1966), exposing us to the shadowy Tristero, a secret underground postal delivery service. It is a paranoid melange revisited in Ishmael Reed’s Mumbo Jumbo (1972) (the Templar-allied Wallflower Order is attempting to root out a jazz-infused “virus” spreading dance crazes and black consciousness), and in less artful, more expansive form by Robert Shea and Robert Anton Wilson in their collage of ancient sects, government agencies and hallucinatory ramblings, The Illuminatus! Trilogy (1975) (“More important than Ulysses or Finnegans Wake”, according to Timothy Leary).

I complained about the slighting reference to Illuminatus! to Michael Johnson (I can't imagine that any literate person would argue that Mumbo Jumbo is better written) and he replied, "There seems an unwritten rule that if you're mentioning Illuminatus! before the Kwality Lit Establishment, you give backhanded compliments. Harris's quote from Leary on Illuminatus! also functioned as code for his audience, it seems. I don't think of Illuminatus! as "less artful" than Mumbo Jumbo, either. The standard bearer for artfulness in that paragraph was Crying of Lot 49, which has made it into the Canon, so..."

Ziokowski himself also has written about his new book, and here's what he says about Illuminatus!

In Ishmael Reed’s diatribe against Western civilization, Mumbo Jumbo (1972), a secret society calling itself “The Wallpaper Order” strives to combat a “psychic epidemic” infecting black communities as it moves from New Orleans toward New York. The Illuminatus! Trilogy (1975) by Robert Shea and Robert Anton Wilson begins as a detective story when two New York detectives investigate the bombing of a leftist magazine’s office and the disappearance of its editor. They discover that the editors were investigating secret societies and conspiracies: notably the “Illuminati.” As the lengthy work develops, the detective story gives way to a science fiction about a group known as the Discordians, whose base is a golden submarine in the Atlantic Ocean and who have been engaged for centuries in a continuing battle against the Illuminati.

Herr Professor Ziolkowski remarks that Umberto Eco's Foucault's Pendulum is "is a critically acclaimed masterpiece and not simply a cult classic," so I guess he gets in his little dig, too. But the book looks interesting.

The erudite Dr. Johnson adds, "BTW: other academic/intellectuals who have written about fiction and conspiracy that I found worthsomewhiles:

-Mark Fenster's _Conspiracy Theories_ (He values RAW's satirical play; the book has been significantly updated since the first ed, which I bought when it came out.)"

I quit reading academic books on authors, except for biographies, some time ago, and one of the reasons was this snooty attitude towards popular literature. Academic critics seem to be a intellectually inbred lot who are writing for each other and not for the general public, who they look down on. (I think RAW made some comments in this vein also.)

I'm not arguing that Illuminatus! is a better written book than Foucault's Pendulum, just that Ziolkowski's "wink, wink, nudge, nudge" attitude towards Illuminatus! is typical of academic critics of popular literature. (That Mumbo, Jumbo is also a satire may be lost on Ziolkowski, whose characterizing of Reed's novel as "a diatribe against Western civilization" could be applied to Illuminatus! also. Perhaps that is Ziolkowski's problem: Both books lampoon Western civilization, but begin at different starting points, and Ziolkowski is just trying to defend the home turf.)

Mumbo Jumbo is in no way inferior to Illuminatus!, though less ambitious, but The Crying of Lot 49 judged solely as a literary product is far superior to both. And anyone interested in the literature of paranoia has to read Foucault's Pendulum.

As "Dr. Johnson" I must say I owe an enormous debt to Profs Hanfkopf, Dhuigneain, and Vinkenoog.

Eco conceptualized readings that were "paranoid overinterpretation"s, and could be dangerous. This was what he was demonstrating in FP. Recently, U. of Iowa prof. of Communications Kembrew McLeod published a book on Pranksters and he makes an argument that Illuminatus! and the Principia Discordia, while "pranking" the culture, were part of a "blowback" because very many readers (ones I personally consider as terminally dumb) were unable to ascertain satire. Lewin's Report From Iron Mountain is still read by Tea Partiers and John Birchers as "real" even though Lewin came out and confessed it was all a hoax. And so, it's read as part of the arsenal to fight the UN-backed New World Order, along with the Protocols (another fake), The Turner Diaries (which I wish was a fake), and Behold A Pale Horse. The "Illuminati" are now as "real" as ever among people with 6th grade reading abilities and fear of anything they don't understand, which seems almost everything, including maybe their own shadows...McLeod sees Illuminatus! as contributing to this "blowback," which seems to bolster Eco's ideas about nefarious secret societies and getting to the ultimate secret which turns out to be a null set.

What interests me is this: let's say McLeod and Eco are right. Why?

Also, Eco is in the club of established academics, so he will be treated with respect by others in the club, wearing the pin and colors of the correct class of intellectuals. RAW was not in the club, and he seemed proud of it. Anyone who scours his entire oeuvre can collect 250-500 jabs at the academic establishment, "New York intellectuals," specialists who only write for colleagues and protect their tenure as a sacred thing, hack professors with no insight, PhDs who suck up to the corporate state, etc.

As a hustling freelance writer-intellectual RAW cited a study put out by a think tank - in conversation with him I recall this - that broke down the intellectuals in the US as either "policy" intellectuals (the ones Chomsky is always attacking) as the Good Guys. everyone else seemed to function as a Nuisance, and RAW say himself in that class...(I think this was a Samuel Ellsworth Huntington dealio, IIRC)

Mumbo Jumbo seems in no way inferior to Illuminatus! to me, too. I agree Eco's FP as a must-read for fans of RAW, and I urge a reading that is dialectical with Illuminatus!

The thing I appreciate most about Crying of Lot 49 is Pynch's incredible sentences. He also preceded all the other books we're talking about, and with the ideas about a hundreds-year-old underground secret society that might still be in operation, Pynch's 1966 book must be seen as a vital influence on both RAW/Shea and Eco, and probably, Ishmael Reed. The difference between all of these "counterculture" conspiracy/secret society novels and Robison/Barruel/Webser/Pawns in the Game, et.al: satire.

I thought Mumbo Jumbo was a pretty good book. After reading for many years about how great it was, my feeling after finally getting around to it was a feeling of slight disappointment. I realize that everyone else on Earth whose opinion I respect thinks it's a great book, but that was my honest reaction.

Here's part of what I wrote on this blog just after finishing it:

"Here is a good review of Mumbo Jumbo from one of my favorite critics, Ted Gioia. I am not sure I can agree, however, with Gioia's comment that "you are best served if you come to this novel with a deep knowledge of history." Ignorance of history is helpful in many places in the section near the end of the book where Reed offers his grand conspiracy theory of history, because the narrative has many jarring mistakes. Constantine was not converted to Christianity in "the late 4th century B.C.," A.D. 378 is not the correct date for the destruction of pagan temples by Emperor Theodosius (the Alexandrian Serapeum was destroyed in A.D. 391 or so), an ancient Egyptian could not have come to South America and made contact with the Incas, and so on."

I thought Mumbo Jumbo was a great book; I thought Reed's style was better in that book than Pynchon's in Crying of Lot 49. I think partly the reason I was not at all disappointed is because I had never heard of mumbo-jumbo, until the quote in the book, and did not really look into it until I saw it in a second-hand bookstore, in which case I just straight out bought it. And enjoyed it from beginning to end, now I buy everything I come across of his.

I found Eco's treatment uninteresting, but he is a good writer. I generally find his fiction books a little uninteresting, and have never read any of his non-fiction.

I love the last post on the guy who went from high finance to homeless advocate upon reading one raw book. I read all of Tom Robbin's novels before I did any of these. He is almost as reclusiveaaa Pynchon, sure, and Reed, RAW were vocal shitdisturbers.A Mocheal seems to explain it, but is the reality tunnel we are in. I got in the Robbin's tunnels first, knew I was being toyed with, in fiction. So, you can't blame an acedemia for not are coating these novels as I do. Those who put Eco over Raw acedemia ally, literati
Y,, are the same as putting Rand over Raw! Liber TaRe ly! It is YOUr impconditioning. What monkey looks in?Robbins&, Pynchon best sentence writers. Dat why arts more drawn to them, I think?Rand is like jack chick comics in prose

Some articles are related in our life,so nice
kojici-podprsenky

The words are so simple and easy to understand
theselfpublishingsystem

Nice to read all post and more innovative
LarevoluciondelmenosesMas

The information's are useful for every people
pulmonologi-ui

Really Must be appreciated for this article
mcconnellsdigital

Very useful comments are posted and everybody like this comments
vvxsk

Not only to read the post, need to spreed every one
SeDaySpa

Most of the post and comments are related my blog
CicligaLetti

Need to implement all the information's in my blog
IkzhiBo

Technically its very well above you said
billspricht

Keep posting this articles and useful for every one
parcxmart

Peoples are giving the wonderful thoughts for all comments
passion-apiculture

Thanks for giving the good informative tutorial
dreamcatcherfilmsinc

Thank you for this guidance.its really informative for all
gubbinssports

Its really nice informative tutorial,so thanks for this tutorial
hjvc