'I am officially Very Poorly' 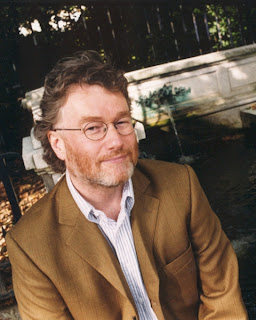 How's your favorite British novelist doing? Mine has terminal cancer.

I've been coming to grips with the fact that Scottish writer Iain M. Banks has announced that he has terminal cancer.  (He is "officially Very Poorly.")

Banks writes science fiction (as "Iain M. Banks") and mainstream novels (as "Iain Banks," no "M" in the middle.)

Banks began publishing in the 1980s (his first, The Wasp Factory, came out in 1984), so I came to his fiction late when I read The Algebraist in 2005. (It was on the Hugo ballot, and I was reading all of the novels on the ballot). The Algebraist was a vivid science fiction novel set in the far future, although it was independent of most of Banks' far future novels set in the future imagined universe known as the Culture. I was amazed at how good The Algebraist was, surprised that I had somehow missed such a good writer, and determined to read more. I've read seven of his books since 2005, trying to play catch-up.

There's no better space opera writer than Banks. His books are utopias, but they also have exciting thriller plots. They wrestle with important political and moral issues. They are smart, but the fun aspects of space opera are not omitted; when I read last year's The Hydrogen Sonata, I was struck by how satisfying the explosion in one of the fight scenes was. Excession is perhaps my favorite Culture novel so far (I have a few left) but they're all good. They stand alone nicely and don't have to be read in any particular order.

The Culture is depicted as an anarchist society that believes in leaving other societies in peace. Banks has never been as big in the U.S. as I believe he ought to be. (I would argue that he is quite obviously the very best SF writer to have never won a Hugo Award, or a Nebula.) He's very big in the United Kingdom, as far as I can tell. I like to think he'll become as famous in the U.S. as he deserves to be. I do seem to spend quite a bit of my time crusading for neglected writers, as perhaps you have noticed.

The official site is here.

By the way, I don't know what it is about Scotland, but it seems to have an interesting science fiction scene. Ken MacLeod is a very good writer, too, and Charles Stross is no slouch, either.

Update: A site has now been launched where fans can leave messages, Iain can provide updates, etc. It is here.

I was very troubled to hear about Mr. Banks' diagnosis yesterday. I've never gotten around to reading the Culture novels, which is where I'd probably start, but I know Alan Moore has spoken well about him which is enough for me. He should be proud to leave behind such a legacy...not very many authors get to write science fiction that's even taken a little seriously.