Pete Townsend once remarked, about British blues musician Alexis Korner, "If only for helping bring the Rolling Stones together, Alexis should be carried round London in a sedan chair for the rest of his life." As I wrote in a previous blog posting, Robert Anton Wilson fans ought to feel the same about Krassner. RAW wrote, in Coincidance, ""Paul Krassner's iconoclastic journal, The Realist, has published more of my writings than any other American magazine, and there was a period in the late 1950s and early 1960s when I might have given up writing entirely if Paul had not gone on publishing my work. I think everybody in the 'counterculture' owes a great debt to Paul Krassner, but I perhaps owe him more than anyone else."

I asked Roman via Twitter if Krassner mentions RAW in the new book. "Oh yes, quite a bit, and I'm only on page 43. Mostly in passing, though. You will definitely, definitely love it. Krassner sent RAW to do a story on Leary at Millbrook, & shortly thereafter tripped for the 1st time (with Leary, of course). He also mentions that RAW was one of the first contributors to The Realist."

Roman also notes that buying the book from Krassner's Web site will let you obtain an autographed copy. For those who can't afford the paper version, there's a cheaper ($9.99) Kindle edition.

This is Paul updating his bio, which was originally published in 1993.

The FBI was pissed that Life magazine ran a relatively "friendly" piece on Krassner and the Yippies, and called him a "raving, unconfined nut." Someone tipped Paul off, and he used it for the title of his autobio.

I have not yet read the updated version, but the 1993 one is one I consider seminal for understanding the craziness of the 60s and 70s.

Harry Reasoner of CBS accused Krassner of "attacking decency in general." Paul loved that one, too. The story of Krassner playing violin at Carnegie Hall as a very young boy seems key.

Some intellectual wrote a thick book called Revel With A Cause (his last name is Kercher), about the radical comedians since the 1950s. He wrote about The Realist: "In order to lend his magazine a light, irreverent spirit, therefore, Krassner needed to offset The Realist's journalism and commentary - and Robert Anton Wilson's ranting 'Negative Thinking' column in particular - with a steady supply of ironic, bemused observations concerning the absurdities and paradoxes thriving in contemporary Cold War America."

I asked Krassner if he'd read this. He said the book was probably piled up around his place somewhere, but he hadn't read it it.

I asked him about Kercher's ideas about RAW's role in The Realist. Paul wrote me back: "Bullshit."

Krassner is one of my heroes. I started reading him more than 50 years ago, and he turned me on to RAW and many other mind-warping influences. Unlike W.C. Fields and the woman who drove him to drink, I have thanked him for it.

As Michael noted, I was referring to the updated version that was published last year. It has "New Chapter" and "Bloopers & Outtakes" splattered on the front cover, and though I'm only up to page 121, there's already been a bunch of refs to recent events (e.g., Mitt Romney, etc.). Not sure how much new stuff is in it in total, but perhaps worth checking out even if you've already read the 1993 edition. I'm trying to read slowly...it's so damn good, don't want it to end. Oh, and lots of RAW stuff (Krassner claims that Wilson "gave himself a middle name, Anton, for his first publication in The Realist..." on p. 44 -- is this true? RAW was "just" RW before that?)

Oh, and I was wrong about Krassner's first acid trip being with Leary. When Krassner was ready, Leary was away in India, so Michael Hollingshead became Krassner's guide. Krassner's climactic message on that trip was, appropriately, "IT'S VERY FUNNY!"

No, it was "Robert Edward Wilson" before that. From the Wikipedia entry on RAW: "Wilson adopted his maternal grandfather's name, Anton, for his writings, at first telling himself that he would save the "Edward" for when he wrote the Great American Novel and later finding that "Robert Anton Wilson" had become an established identity." 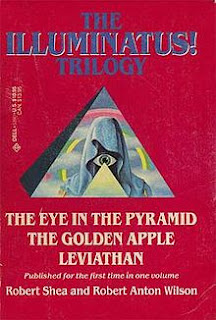