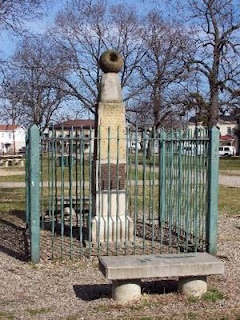 I tend to think of Ohio, where I've lived since 2003 and where Robert Anton Wilson lived in the early 1960s, as being kind of a prosaic, middle class state. I don't think of it as being a place where one expects oddness, as one might in, say, California. (This is in spite of the fact that the Church of the Subgenius is headquartered right here in Cleveland.) But one oddball Ohioan helped inspire a great work of literature.

In Cosmic Trigger II, in the chapter entitled "Cosmic Economics," Wilson writes about one John Cleves Symmes Jr., who believed the earth is hollow, "shaped more or less like a fat doughnut," as Wilson puts it. Wilson then describes how a Pennsylvania lawyer, Jeremiah Reynolds, led a failed expedition to Antarctica to try to prove the theory.

After that failed venture, Wilson writes, "Reynolds consoled himself by writing a melodramatic and popular book about the cruise, including all the good sea-yarns he had heard along the way. Herman Melville read it and one chapter -- about a giant white whale that had almost incredible cunning a good luck in escaping whalers again and again -- inspired Moby-Dick."

The chapter describes the oddball monument to Symmes in Hamilton, Ohio. I've put a photograph of it at the top of this post.
on August 12, 2011