A few questions for Douglas Rushkoff 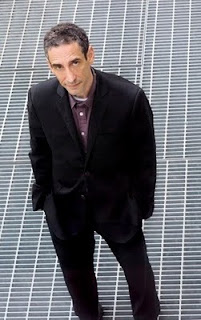 Douglas Rushkoff's Wikipedia biography states that "Rushkoff worked with both Robert Anton Wilson and Timothy Leary on developing philosophical systems to explain consciousness, its interaction with technology, and social evolution of the human species, and references both consistently in his work." Rushkoff has been an instructor at the Maybe Logic Academy.

While I am not enough of an expert on Mr. Rushkoff to intelligently discuss all of his intellectual influences, and how his insights related to Robert Anton Wilson's, I feel comfortable making a couple of assertions: (1) Fans of RAW will enjoy listening to Mr. Rushkoff, too and (2) Program or Be Programmed: Ten Commands for a Digital Age is a really good book. (It's also a physically beautiful little book, making a nice argument for old-fashioned book production in a digital age.)

Rushkoff has been described as a "media theorist," but a number of other labels could be applied. A sentence from the official biography: "Winner of the first Neil Postman award for Career Achievement in Public Intellectual Activity, Douglas Rushkoff is an author, teacher, and documentarian who focuses on the ways people, cultures, and institutions create, share, and influence each other’s values."

Reading the biography makes me feel like a hopeless underachiever, but here's another couple of sentences: "Rushkoff is a PhD candidate at Utrecht University’s New Media Program. He has taught regularly for the MaybeLogic Academy, NYU’s Interactive Telecommunications Program, and the Esalen Institute. He also lectures about media, art, society, and change at conferences and universities around the world." There's also information about his articles that appear all over the place, his PBS documentaries, his graphic novels, and so on.

Despite his busy schedule, Rushkoff immediately agreed when in the wake of finishing his new book, I asked if I could pose a few questions.

Program or Be Programmed is a slim book, but I thought you packed a lot into it. I had the impression when I read it that it synthesizes years of thought, reading other books about the Internet and personal experience using technology. Was that how it felt to you writing it?

Yeah. Each sentence could be a paragraph, each paragraph a chapter, and each chapter a whole book. It's twenty-five years of thinking about interactive media in there. I haven't really written a book explicitly about digital technology and the net before, even though it's the field of study I'm best known for. So I had hundreds of articles and talks worth of material and collected insights to share.

The trick was doing it in a way that made sense to people immediately - especially to people who are used to engaging with ideas through Twitter feeds. There's no time to make an argument. I had to write sentences that functioned one way while being read and then unpacked themselves later in the reader's brain.

I definitely felt like I was on solid ground throughout, though. I've thought about these issues so much, and tested my conclusions over a course of years, heard the counter-arguments, and had time to refine my thinking. So of everything I've written, it's the most cured, smoothed out, and densely packed.

I agree completely with your first command, "Do Not Be Always On," but it isn't always easy to follow. This morning, for example, I made a conscious decision to read the first chapter of a novel I wanted to start before I turned on the laptop to check my email. Have you trained yourself not to be always on, or is it still a struggle sometimes?

Well, just the fact that it's only a struggle *sometimes* means we're not always on, right? I still struggle with the incoming flow of media and messaging, absolutely. I have over 3000 unanswered emails in my inbox right now. It varies from about 1000 to 5000 at any given moment. I used to get really anxious about it, and now I just dig through what I can and then go off and do something I actually want or need to.

The bias of the medium makes the incoming messages seem more important than whatever we were doing. But just because something is pinging at us does not mean we have to look at it. It's a real-time thing, anyway - that's the whole point of the chapter you're referring to. It's not a living breathing human being on the other end of a phone line, it's a message.

One of my favorite sentences in your book is "I've only used one name on the Internet: Rushkoff." I try to post under a clear identity, and I hate it when I'm attacked anonymously.

My newspaper finally began making people register before posting online. Before we did that, I noticed there was a split in the building on what people thought of the comments. The editors liked making it easy to comment, because they wanted pageviews, but the reporters hated it, because people didn't want to talk to us. Our sources were afraid of being attacked online. Have you noticed similar situations at other places?

Yeah, sure. The short-term needs of the market are always what bring down the quality of something. On the net, that effect is amplified. Publications want hit counts by any means necessary - but instead of just getting stupid readers, the stupid readers are actually contributors to the publication. Those comments fields are still under the masthead. They create the culture of the publication.

So a lot of places are realizing that registration is a good idea - plus they can leverage more when they know more. Advertisers love that user data, don't forget.

But yeah - this notion that we have to leave comments on to all comers no matter what just yields the angriest and least informed crap. There's nothing wrong with making people say who they are. If they're in real danger of being killed for speaking the truth, we can make exceptions. But it's not the rule.

Another of your commands is "Share, Don't Steal." What do you do, if anything, about people trying to steal your work and distribute it on the Internet? Have you ever felt any temptation to release any of your books under Creative Commons, the way Cory Doctorow does?

I've distributed a lot of stuff under Creative Commons. Three books, and a bunch of essays. Sometimes it's practical and great, but I don't see it as a requirement. I love the freedom to use Creative Commons.

On the other hand, my book Life Inc sold maybe 25,000 copies in hardcover, yet was downloaded 250,000 times as a torrent. That's pretty nuts. I'm glad a lot of people got to read it, but it feels like a whole lot of people and search engines and torrent sites extracted value out of something I did.

As I pointed out on my RAW blog, Robert Anton Wilson forecast First Amendment struggles on the Internet long before they really became an issue. What do you think he would make of the current controversy over Wikileaks?

He'd love it, but less from some constitutional perspective than that the whole story throws things out of balance. It makes people question the security of information, the power of government, the ability of the counterculture. It is cognitively destabilizing. That's all RAW was after, I think. So he'd be pleased.

When people describe you as an intellectual heir to Robert Anton Wilson, do you find it flattering, irritating, or a little of both?

Heard Douglas Rushkoff speak at a convention in San Antonio. I have also read his books and am familiar with his documentary work. All I can say is that he makes me take a closer look at the world around us and question some of the values that appear to be mainstream.

Great interview. Douglas has brought to light and explained a lot of concepts for me and continues to do so..Thanks for the interview and posting this here

Thanks for this interview; somvery good questions and responses. I would have liked to know in what context or where he worked with timothy leary, he never co-wrote anything with either of them, as far as I know. If he is still directing courses at Maybe Logic when I get some spending money I wil definitly be signing up to one of his.

Your website is very interesting, it is very meaningful and inspirational. I think your website deserves to be the number one. hopefully it could be real obat herbal tbc

I was amazed by you. the way you create a website very thorough and good. This is very very impressive. Thank you for sharing hopefully more successful. obat ginjal bengkak

I expect this website to be more creative and innovative full thank you very much for the article you create, it is very nice interesting obat batuk berdarah

I am impressed by the information that you have on this blog. It shows how well you understand this subject Cara Mengobati Infeksi Toxoplasma

This is one of the best pages I've visited glad to be in your yard this amazing I find your site from gogole. Thanks for sharing, and I would be very happy and happy if you are also willing to visit to our website and read them to share information and knowledge about health, disease and treatment. Thank you and may be beneficial for all.
Cara Mengobati Kelenjar Getah Bening Paling Ampuh dan Efektif
Cara Mengatasi Kekurangan Kalsium
Cara Menurunkan Tekanan Darah Tinggi Yang Alami Ampuh dan Efektif
Cara Menyembuhkan Darah Kental Sampai Sembuh
Cara Ampuh Mengobati Dan Menyembuhkan Penyakit Batu Empedu Tanpa Operasi
Pengobatan Tradisional Penyakit Liver

Really great post.I enjoy to reading this article.There is such a true article there is more information for us .thanks for sharing this lovely post. Goa Escorts

a given article is very interesting and very useful for me, thank you very much admin and pardon me permission to share the article here :

I can feel that the articles contained in this blog is so interesting. I also get a variety informasin, thanks.
cara mengobati penyakit selulitis orbitalis

I can feel that the articles contained in this blog is so interesting. I also get a variety informasin, thanks.
obat tukak lambung tradisional

I can feel that the articles contained in this blog is so interesting. I also get a variety informasin, thanks.
obat tukak lambung tradisional