New book on the KLF and RAW 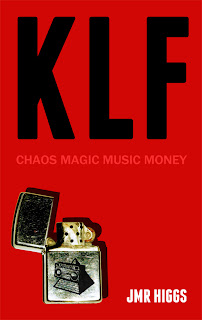 JMR Higgs has announced that his new book, KLF: Chaos Magic Music Money will be published Friday as a Kindle ebook. A paperback will be released next year.

Higgs explains, "It is an attempt to explain why The KLF burnt a million pounds in a deserted boathouse on a Scottish Island in 1994. It's a story about Robert Anton Wilson, Dada, punk, Alan Moore, Operation Mindfuck, Situationists, rave, magic, Ken Campbell and the alchemical properties of Doctor Who.

"You know, all the good stuff."

The Nov. 23 publication date is appropriate, Higgs notes, "seeing as it's largely about RAW and Discordianism and tracks how those threads affected the UK."

The fact that the book is coming out at all is good news. As I wrote on Oct. 17, Higgs had serious doubts about it after he finished and was seriously considering shelving it.

Naturally, I asked him about that.

"Yeah my proof readers and beta readers gave me a hard time when I suggested not putting it out, and basically slapped me about a bit until I saw sense. I'm still a little wary of the damn thing because things did get a little weird writing it, but in general I'm feeling better about it," Higgs replied.

Higgs is the author of the novel The Brandy of the Damned, which came out this year and which I liked very much. The sequel, The First Church on the Moon, will be out soon.

His book on Timothy Leary, I Have America Surrounded, remains available on Amazon.

Oh yeah! And Nov 23 was the airing of the first episode of Doctor Who back in 1963. The day after JFK was shot.

I enjoyed Brandy of Damned, I purchased it as a kindle edition I read it all at once because its narrative was very engaging, it also has some very good passgages about how people are kept in memory ( i think I'll go back and read it again).

I am glad he has decided to releases this book, I was mildly dissapointed that he might shelve it though I wouldn't want him to release anything he feels uncomfortable releasing or dissatisfied with. the book seems like it offers a lot, and if it has some of the elegant prose to be found in Brandy of Damned, it looks like we are in for something pretty good.

I didn't read to the end of this.

And a sequel as well? nice.