Image of the day

Jesse Walker has a daily feature on his Twitter account called "Your morning image," and sombunall of them are related to the topic of this blog. Here's the image that was featured Wednesday: 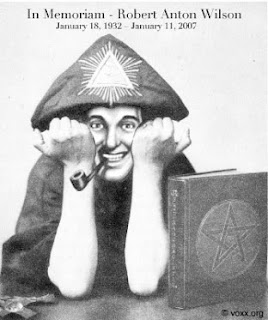 Blowing up the picture reveals that it is attributed to Voxx.org. It was featured in a posting about RAW put up after he died.  The About section of the Web site says, "Voxx is internationally known as an incredibly accurate and entertaining Psychic. She is prominently featured as America’s most accurate Love and Sex Psychic in the book, America’s Top 100 Psychics, (Simon & Schuster)."
on March 21, 2013

Thanks for posting this wonderful 'mask of the Illuminati. J.R. "Bob" Dobbs of the Church of the Sub-Genius in Crowley regalia and posture makes a great pun.

I love this. Thanks for sharing it. I suspect Bob would have loved it.

Voxx the Psychic here... I created the pic (credited to my website, Voxx.Org). Just saw this. Bob and his lovely wife, Arlen were Magickal friends of mine. It was as an honor to know him. I'm so glad that my tribute was enjoyed, and I appreciate the positive comments. I agree that RAW would have liked the visual pun as well. Ps thank you for posting my credit as well! ~Voxx~