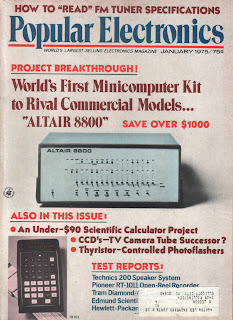 In a sane world, the above magazine would be more famous than Joe Paterno. It is the magazine that inspired Bill Gates and Paul Allen to found Microsoft by writing software for the first personal computer, the Altair. The same computer also was tested by the Homebrew Computer Club, which had members, such as Steve Wozniak, who went on to build the Apple.

Note that the magazine was Popular Electronics, and not Popular Mechanics (a mistake repeated in the Steve Jobs biography by Walter Isaacson that I mentioned yesterday.)
on November 12, 2011

Every time I look at that history: Gates/Allen and Jobs/Woz and many many others - like Doug Engelbart -I'm knocked on my ass by the dynamism and stunning rate of speed by which we all got the machines we have now. And there's no reason to think things are going to slow down anytime soon. It's just awesome stuff to ponder: the omniephemeralization of digital tech!

Confusing the name of the magazine that the whole personal computer story hinges on makes all other information in this book highly suspect.