Checking in with Eric Wagner
When it comes to the work of author Robert Anton Wilson, Eric Wagner is one of the go-to experts that many of us turn to, because Mr. Wagner literally wrote the book. His AN INSIDER’S GUIDE TO ROBERT ANTON WILSON is still the only book available about RAW.
A new edition of the book is forthcoming from Wagner, so I thought it would be a good time to pose a few questiona.
Wagner, 48, lives in Corona, Calif., and is “happily married,” he says. (His book begins and ends with a poem for his wife.)
Wagner also explains, “In the universe next door I got a Ph.D. in musicology at UC Berkeley, but I like our universe pretty well. I teach full time at a high school and part time at a community college. I consider Rafi Zabor, Thomas Pynchon, Joseph Kerman, David Thomson and Charles Rosen my favorite living writers. I play bass and study kenpo, and I have yet to get very good at pranayama, but I look forward tuning into that Ganges radiation over the next decade. I find E-Prime a useful tool, and I hope Southern Star comes out on DVD pretty soon." 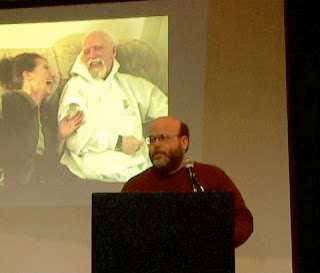 Eric Wagner (at Wilsonfest II.)
Q. Tell us about the new edition of AN INSIDER'S GUIDE TO ROBERT ANTON WILSON. When is it coming out, and how will it differ from the first edition?
A. The new edition has some terrific illustrations by Bobby Campbell and an afterword by myself. I particularly like Bobby's illustration of the Ninth Circuit, which makes me think about the upcoming date of 10/10/10. Schoenberg wrote about the curse of the ninth symphony, where Beethoven, Bruckner and Mahler all died before completing their tenth symphony. Researching this today I learned that conductor Hans von Bülow referred to Brahms' First Symphony as "Beethoven's Tenth Symphony." I don't "believe" in this curse, but when I think about the possibility of a ninth or tenth circuit of the brain, it comes to mind.
Unfortunately I did not have the opportunity to correct any typos in the new edition.
Q. When is the new edition of AN INSIDERS GUIDE TO ROBERT ANTON WILSON going to be published?
A. I don't know.
Q. Before you published your book in 2004,did RAW read the book, or portions of it, and comment on any of your work?
A. Yes, I had sent Bob all the issues of my poetry/basketball zine noon blue apples during the 80's and 90's. In 1999 my wife suggested I write a book about Bob, and around the same time Dr. Michael Johnson made a similar suggestion. I mentioned the idea to Bob and he loved it. I sent him parts of it as I wrote it, and I asked him lots of questions. We also discussed it the last few times I saw him in 1999 and 2000. I sent a copy of what I then thought of as the final draft a few years later, although the book continued to evolve until publication.
Q. Could you tell us a bit about your new book, STRAIGHT OUTTA DUBLIN? I love the title, by the way.
A. Glad you like the title. I originally thought of calling it Wilson/Joyce, but I like the new title better. Bob told me he would like me to write more about how Joyce influenced him, so I focused on that in my first book and in my master's thesis. While working on my thesis I imagined writing an antithesis after I finished. (Of course, if one letter of the thesis comes in contact with the antithesis, universe explodes.) This led me to imagine a book on Wilson and Joyce based on the Illuminati theory of history, with five sections: Thesis, Antithesis, Synthesis, Parenthesis and/or Paralysis, and Paralysis and/or Paresis. I don't yet know how the Decembrists will figure into it, although four years ago when I finished reading War and Peace, it delighted me that Bob starting talking about the Decembrists and their 1825 uprising about the same time I learned that Tolstoy originally started writing War and Peace as a book about the Decembrists. The novel barely mentions the Decembrists at the very end. Perhaps I will mention the Decembrists at the very end of my book. I have not yet found a reference to the Decembrists in Joyce, but as poet Laurence Binyon said, "Slowness is beauty."
I also love this line from Pound's Cantos, "Only sequoias are slow enough."
Q. Do you have any other books on RAW in the works? Have you published any new articles on him since the book came out?
A. I wrote my master's thesis on The Influence of Finnegans Wake on Robert Anton Wilson's Masks of the Illuminati, which expanded theMasks of the Illuminati appendix of my book. I have begun expanding it further into my new book Straight Outta Dublin. I also wrote introductions to the new editions of Wilhelm Reich in Hell and Nature's God. In addition I wrote up material for the three Maybe Logic courses I've taught, and I wrote a few articles for the old New Falcon website and the Maybe Quarterly.
Q. Why did you travel to Honolulu, Ingolstadt, Egypt, Dublin and other locales "attempting to understand the ideas behind Wilson's works," as the cover copy says? Was that actually the reason you traveled so widely?
A. Well, I traveled for various reasons, but my interest in Bob Wilson's work often shaped my travels. When I first visited Europe in 1985, I arranged my trip so that I would visit Ingolstadt, Bavaria, on July 23. When I visited Cairo in 1994, I made a point of seeing the Stele of Revealing which influenced Aleister Crowley so much. My parents lived in England for a while, and a wonderful article by Wilson inMagical Blend inspired me to visit Dublin during my visit with my parents.
on August 15, 2010

I thoroughly enjoyed this interview with the great Wilson exegete Eric Wagner. Thanks!

Related: having worked with librarians for many years, I know they buy books largely based on REVIEWS they find in various sources. I have also found that considered, thoughtful writing to librarians has led to a neglected book (or three) being bought and put into circulation. I'm going to lobby for all or mostbunall of the books cited by Wagner here. (Except War and Peace, which seems to be doing pretty well and I think eventually it will receive notice.)

Thanks a lot for sharing such valuable information http://awriter.org/rushessaycom/
.

Writing a successful case study requires lot more than a simple problem-solution statement. The purpose of a case study is to make your audience relate to the situation and ultimately get convinced that you are the only one who can provide the best solution. See more sop for internship