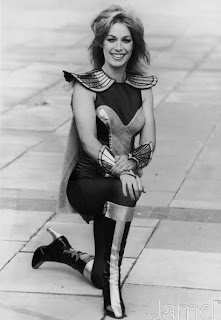 John Higgs recently journeyed from Brighton to London (on the M23 highway, naturally), met up with actress Prunella Gee and returned home with a 1970s interview with Robert Anton Wilson and Robert Shea. He offered on Twitter to scan it and share it with readers of this blog.

As it turns out, there was no need. The wonderful Robert Anton Wilson fans Web site has the interview. It's a good look at RAW's thinking during the 1970s (he explains what "Osiris is a black god" means). The only disappointment is that Shea kind of disappears for much of the interview. I would have liked more of him, too.

Prunella Gee is a lovely blonde British actress with a long list of credits, but RAW fans will remember her as the actress who portrayed Eris and Mavis in the British stage production of Illuminatus! (She was formerly married to Ken Campbell and they had a daughter, Daisy Eris.) I believe she is now retired from stage, screen and British TV and is a counselor in London.
on May 17, 2013